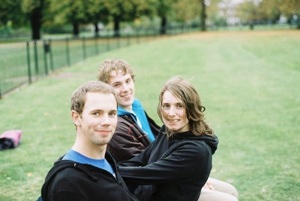 {photographer of adorable photo unknown, but from the Bar/None website}

Holy moly! Athens Popfest is just over a week away! I’m spotlighting a handful of bands that I’m most excited to see. Let’s kick off with my most anticipated band, Standard Fare.

From the first moment I heard the drum clicks into a perfect Johnny Marr-esque guitar jangle into the line “You’re only 15/what was I thinking?” from the song “Fifteen”, I was hooked on Sheffield indie pop trio Standard Fare. Combining swooning boy/girl vocals and guitar lines ripped from 90’s alt-rock bands (in a good way) with heartbreakingly sincere and simple lyrics, Standard Fare’s debut album The Noyelle Beat is one of the best debuts I’ve heard in ages.

Noyelle Beat’s songs flow mostly in a mid-tempo swagger and pull off something that most indie pop records don’t: they sound cool. Maybe it’s the production, or maybe it’s the heavy British accents, but it lacks a very nerdy vibe that peppers most indie pop (this is not a bad thing). The lyrics themselves feature insanely honest and sincere vignettes of being a young adult and consistently being in and out of love and feeling that everything happening is the most important thing that ever happened, with lines like “Global warming/is getting me down/it’s making the sea between us wider and deeper/but I’m not Moses and I don’t know how/to split up the ocean and drive right on over”  and “Even on the phone/it’s not like life” from the long distance relationship anti-anthem “Philadelphia”.

Back to “Fifteen” (potentially the best statutory pop song ever, though the listener is assured “nothing happened!”), bassist/vocalist Emma Kupa croons during the minimalist but catchy chorus “But this isn’t right/I don’t want to have to stay the night”, perfectly capturing the inappropriate longing without ever becoming crass.  There’s something about this band that makes me think they might be huge. Maybe it’s just hoping, but I’d love to know that fifteen year olds were globally wishing they were the subject of “Fifteen”.

And for your pleasure, here’s a video of my current song-du-jour, “Fifteen”.