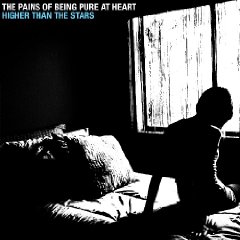 Pains of Being Pure at Heart

Higher Than The Stars EP

Oh, my friend, I am so sorry. I have become one of them too. Ga-ga for the new indie pop blog romance. I know we mocked them, the length of the band name, the way people jumped on the bandwagon. But who could resist “Shit-faced, following a dark place, drinking in the last days” as an opening line to a song as tinkly, moany, sparkly, and swooning as anything The Cure or Echo & The Bunnymen ever released in their (best) eschatological sweep-rock periods? And then: “Mystery looks just like a mumble mumble, bumble-fuck, mumble.” I mean, bumble-fuck. He really uses that word in a song poppier than heroin. Yeah.

As if lyrics mattered, but they do. It’s a deciding factor, and they can’t just be clever lines, there was to be a story. In this case in opener “Higher Than The Stars” it’s a Freudian filial wish-fulfillment nightmare (“She was like a brother, until you dropped another / in the back of her mother’s car”). That is, the protagonist and his adored seem like creepy kids in a “Flowers in the Attic” scenario, with Gothic, unrequited, imagined-incestuous love at its heart-scraping core. Kip Berman is at the center as Alex Naidus, Kurt Feldman, and Peggy Wang-East musically swirl about him like girls around a maypole. Ashes to ashes, indeed.

If this was a full-length, that would be the first song I loved, but this is “only” an EP, so expectations aren’t too high for an overplus of pleasure. EPs in the post-punk genre are both deliberate bridges between albums and a good way for a band like The Pains of Being Pure At Heart to shake out some more frivolous work. The next track, “103” is the perfect flick-away B-side to the previous anthem, both slightly lighter musical variations of The Cure’s “Just Like Heaven” with a more northern UK vocal melody.

“103” is short, that is, perfect sized, as we can quickly get to the superior next track, concert favorite “Falling Over,” even more bass-bouncy than usual TPOBPAH fare, with “Don’t you don’t you touch me, just be cool / I’d fall over for you” as the kind of chorus that will show up in movies about the 80s about ten years from now. It won’t sound out of place between something like Haircut 100 and The Smiths, but you know, that doesn’t mean a fucking thing other than it’s catchy and smart and has tons of charisma.

“Twins,” the final new song on the EP, is darker, more bitter than what came before, but with another shining chorus (about “gold,” appropriately). A tougher if less incandescent side to the band, necessary to stop the punters from classifying Kip as just another twee one. The delectable St. Etienne work their spacey, bass-less magic on a remix of “Higher Than The Stars” which lacks aching to be on a mix-tape work of certain twelve inches from bands I’ve mentioned previously, but part of the joy of this kind of music is the occasional wavering into bliss for its own sake. Throughout, from protein-choice to spices, this is a tantalizing opener to their next album-length course.

And all apologies to my less weak, more mercurial comrades who will taunt me for being ensnared like the others.