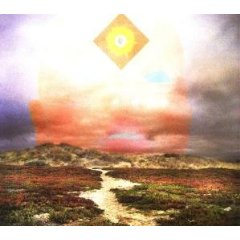 Beneath the complex layers of sound in each song on High Places' self-titled debut lies a fundamental innocence, a bright-eyed wonder that mirrors a child's view of the world. The band find amusement in their vortex of electronics and glitches, a sweetness in the dub-lite tapestries of tropicalia. In fact, it's this ray of sunlight found in Mary Pearson's vocals that guides the listener through the chaos surrounding each track — A spiritual guide through musical transcendence. Without her voice, we'd be swept away by the sonic tide.

Describing that tide proves difficult. The beats at the base of "The Storm" waver between cold electronic skips and organic found sounds. The resulting mix is unearthly, perhaps heavenly, but certainly not grounded. Multi-instrumentalist Rob Barber layers each track so thick in reverb and delay that focusing on one sound will leave you lost. It takes Pearson's calming mantra on "The Tree with the Lights in It" to make sense of the polyrhythms that twist and weave into catchy melodies. Her lyrics are soothing and her delivery is often childlike and slightly singsong, but there's a lot of depth there if you can make them out. Even if you can't, her melody will guide you home like the North Star.

Building hooks and beats out of so much chaos can't be easy. Even the drum break on "Gold Coin" sounds like three different noises smooshed together into something musical. The tracks on High Places constantly sound like they're two seconds away from breaking through their molds and spilling on the floor… imagine a five-year-old making Jell-O without parental supervision. But they don't. How does Barber do that? What's the secret to making yummy gelatin snacks without getting musically grounded for a week? However they do it, it works. High Places completely non-commercial sound is still infinitely catchy and will keep you humming long after the headphones come out and the room stops spinning.