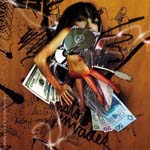 The Structure Of A Precise Fashion

History Invades is from Portland, where there are a lot of bands right now, many of whom combine post-punk influences with math rock. The bio says, "Save us, save us, from (the) ordinary." Hmmm, interesting.

This is their debut on Lujo Records, and it is produced by Jason Martin of Starflyer 59 fame — he adds his neat tricks, like the electronic drum-beats of "Here Comes The Smart Patrol." Okay, I'm guessing; that 80s-techno instrumental could have been the band's idea. But it seems like something Martin would do with one of his recent forays into synth-inflected pop experimentalism.

I like the soft sheen Martin gives to what would normally be totally jagged, sing-then-scream post-hardcore. It is actually an enjoyable juxtaposition, and makes the accessible guitar lines of songs like "I Am The CEO of McDonnell-Douglas" very enjoyable, especially when the bass bounces out of the mix halfway through the song. Nice little Casio at the end augmenting the screaming. Actually, the electronics throughout are perfect — very cool.

These are the problems I have with this record: The lyrics and vocals and song structures are completely devoid of originality or urgency. The funny title idea has been played out ("We Ran Out Of Bridges So We Burned Down Our Houses," "My Name Is Afraid"). The jarring tempos and trade-off vocals are pretty much turn of the century. This album has been recorded for Lujo and other labels many times already, and though this more accessible version is very listenable, it is also made by young men who know they should be trying harder to write actual songs, not ape a well-worn style.

One vocalist whines on the ninth track, "I've fallen down right here!" It's that kind of generic, please-help-me bland emo posturing that goes on, year after year. The music around this meaningless phrase has some artfulness to it, but all I can hear is the sound of a thousand bands that came before.