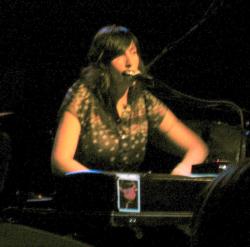 2007 is the year of the chanteuse. Female singer-songwriters have left the realm of the lesbian acoustic mellow predictability and have expanded in staggering directions, some to great effect, even for a "I'm not into female singer-songwriters" skeptic like me. From my personal favorites (Amy Winehouse, Nicole Atkins, Lily Allen, Heather Duby) to the ones I respect but don't really dig on (Regina Spektor, I'm looking at you) to the ones that freak my shit out (hello, Johanna Newsom), it's clear to me that the ladies have taken on the role of Leader of the Band in new and evocative ways.

I've discovered a new chanteuse in our midst: the ethereal Johanna Kunin, an artist from Seattle who's currently touring with the legendary Robyn Hitchcock. Johanna falls more to the ethereal, dreamy side of chanteuse-dom, evoking Regina Spector, Tori Amos, and most vividly for me, Kate Halvenik (the Norwegian chanteuse I caught multiple times at SXSW who's currently touring with Air). Johanna sings and plays keys with an accompanying cellist and violinist (imaginary note: I can't rule out that it was actually a viola). Her sound drips with an ephemeral, Nothing Gold Can Stay sort of sadness, a sense of the fragility of things, laden with minor chords and Johanna's strong yet whispery vocals. It was a quiet and dignified set, one that the audience fell for even sans hooks (but with lines and sinkers?), and one that was perfectly suited to the (mostly older) crowd at the Croc, eagerly awaiting Robyn Hitchcock.

Next up was Sean Nelson (Harvey Danger, ex-Long Winters) and his Mortal Enemies, though tonight, as he joked, only one Mortal Enemy (keyboardist Mark Nichols) was present — at least onstage. I adore Sean and love nothing more than to watch him perform in his element: his element, of course, being anything wildly theatrical that allows his bombastic voice, persona, and wit to take center stage and hold hordes of adoring fans captivated.

He succeeded in spades tonight, playing a repertoire that ranged from Harvey Danger songs to Harry Nilsson songs (we'll get to that in a minute) to brand new Nelson songs (as in Sean, not as in the twins) that enchanted the teeming crowd.

"And they said the Crocodile had no place for show tunes," quipped Nelson.

Sean's banter and his lyrics required an admission score of at least 650 on the verbal portion of your SATs. A couple of my favorite lyrics (frantically scrawled in my notepad in the dark during the set and nearly illegible by the light of day):

"Nothing is more charming is a narcissist with whom you've just agreed."

Ahh, how wise and how true. My favorite song was one Sean introduced as brand new, a song about forming a supergroup and a subsequent foray into coke addiction, friendships ssquandered, and a manager from hell. The song name-checked both Velvet Revolver and HSAS (at which point Sean quizzically looked to the audience and I "woo-hooed!" loudly. Never underestimate my power to recall the most obscure Journey-related trivia) and got mucho guffaws from the rapt audience — though no songs got the cheers that the "Nelson Sings Nilsson" covers got.

For the un-Nilsson-Nelson initiated: Harry Nilsson was an under-appreciated American singer-songwriter for whom Sean Nelson has great admiration. Sean took this fandom to the next level by hosting a "Nelson Sings Nilsson" show back in December, which featured Sean covering Harry, accompanied by a 20+ piece orchestra. Tragically, TIG had a competing show that night (weep!), but I've heard nothing but glowing praise for his performance. After hearing them live with almost no backing instrumentation, I'm thrilled to pieces to report there will be another performance! It will be on May 19th at the Triple Door and this time TIG will not sponsoring a completing show! Rejoice!

In case I haven't convinced you yet, Sean has made some samples of Nelson singing Nilsson available on his website.

As Sean Nelson finished his set and prepared to perform with Robyn Hitchcock and the Venus 3, I mused: when did Hitchcock become a virtual Seattle native? He's the most Anglo of the Brits and yet, when he appears live in Seattle, it's like every major musician in town comes out of the woodwork to see him (and most of them are onstage with him).

The show began with just Robyn and his acoustic guitar. For song two, drummer Bill Rieflin (Ministry, R.E.M.) joins him. Song three, add Peter Buck on guitar; song four, out comes Scott McCaughey (Young Fresh Fellows, the Minus Five), and on song five, Sean Nelson joins them onstage. The fellas are resplendent in their musical glory, confident with their 30 years of musical history and clearly still absolutely enamored with playing their songs.

I've been a fan of Robyn Hitchcock's since the "and the Egyptians" days, though not as long as the Soft Boys days. He has one of my top favorite voices of all time and were Robyn to take the stage and simply read the dictionary, I would be entranced.

That said, I must own up that I recognized almost none of the songs Robyn played at this show. I own precisely three records (Perspex Island, Queen Elvis, and Jewels For Sophia) and knew only two songs in the set. But it didn't stop me from being completely enthralled throughout the night. And no wonder: one look at the man's musical CV and one confused glance at his homepage should tell you that:

I stood in the front and rocked out to the first dozen songs, thrilled to be listening but secretly hoping that he'd play something I recognized and could share back in this article. Just as I gave up and escaped to the back, I heard the opening notes of "Madonna of the Wasp," the first track on Queen Elvis. gasped, turned to say "OMG HE'S PLAYING MADONNA OF THE WASPS" to the person next to me (thanks for listening to me gush, Jon) before I dove back into the crowd. It was glorious to hear, but I wish the show had been a bit more like the one I saw at the Croc back in 2002 (with Liz, but just before Three Imaginary Girls, gasp!), when Robyn played "One Long Pair of Eyes" and "She Doesn't Exist" and other personal favorites of mine. Because you know, the show was all about *me*. Snicker.

Also of note, during the set, Robyn and the Venus 3 performed a song that extensively referenced Chris Ballew (frontman for the Presidents of the Unit
ed States of America). Then next thing you know, Chris Ballew appeared onstage and started singing with the band like he'd been there all night. It was like a crazy jazz jam session, only with prominent Seattle-based indie-rockers on-stage and not, say, saxophones.

Robyn has spent the last few years making a very big point of letting us know just how well he knows Seattle. First he had that single "Viva Seatac" a few years back (on Jewels for Sophia), where he name-checked Ballard and the Space Needle and our city's coffee (and heroin) addiction issues. Tonight he sang a song about Belltown ("it's a place you end up," he quipped) that referenced the Pink Elephant Car Wash on Denny and the Two Bells Tavern and… I don't know. it was kinda bizarre.

Remember when David Gedge of Cinerama announced he was moving to Seattle, and igLiz predicted his Seattle-based lyrics? Then he lived here for a couple of years and wrote "Interstate 5?" What's with the Brits and their need to provide musical virtual tour guides of Seattle? I can't say I understand it… but as I said, there's no way I'm anywhere near smart enough to understand Robyn Hitchcock. My job was simply to enjoy. Which I did!

And as a final note: The sign on the door of the Croc said "no professional photography allowed." I asked if craptacular point-and-shoot photography was, and they said yes — but that my photos had better not be very good. I think you'll all agree that I succeeded in spades…