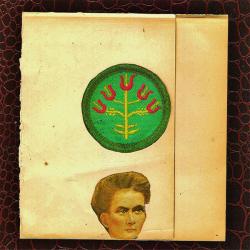 The self-titled debut from Chicago, Illinois, duo Hobbyist is a knock out-passionate post-punky protest against all the societal gears that grind women (and men) down every day in work, religion, home, health, life and death. Holly Prindle (vocals) and Marc Mozga (vocals, drum machine programming, guitars, bass, melodica) angle their arch, sample-fueled, dubby rant-stomps as musical sabotage to the factory of fear called Modern America. In a world where sacramental wine becomes after hours buzz against pain, and the thin girl playing the fat girl wins the awards, it's all about clinging to each other and hearing each others' beating hearts.

The two used to be I Luv Luv Birds, but I've never heard the self-released albums they put out under that name. I wonder if they've always been as good as blending their female-male short story narratives in sweet and sour sing-song, owning these stories of life across the wrong side of the tracks, against the "kamikaze heroes and nazi fucks," capturing the essences of whole lives in a couple of shattering lines. This collection of songs are based around a "verite-type film" that Mozga has been working on about a family with an autistic child. None of it sounds anything less than powerful, but seductive, well played and produced, delivering the anthemic goods without any sonic slush to keep from connecting. Holly's voice warmly reminds me of everyone from Poison Girls' Vi Subversa (!!) to Ari Up to PJ Harvey — without acing in on any of 'em. It's all hers. "Goddamn soulless lies, get back under your rock and hide" she sings, and she has the vocal strength to make it sound liex a very real hex on what vexes her deeply.

I haven't mentioned any songs yet because they're all great; this is one of the most consistently rewarding albums you'll hear this year, with keen lyrics and creative sounds spilling out every minute it goes by. I love it all. A pair of fiercely personal portraits of "ladies" opens the album: "Deb" kicks off great with the most OG punk-era vocal melody married to a noisy drum machine burp-and-rattle and guitar squallor; it opens with a woman degraded by "babysitting him like she babysits the kids." It's a staunch burn against people giving up and giving in to "hanging in there" while being silenced by all sides. "Head of Cliche" is a ferocious portrait of a religiously-intoxicated life lived in coldness and rigidity. From here the album gets more personal and universal, but never loses the intensity, creativity, and boldness of the one-two opening punch of the must-have Hobbyist. And if you dig psyche-y, post-rock-y protest music, you will thank yourself for getting it.