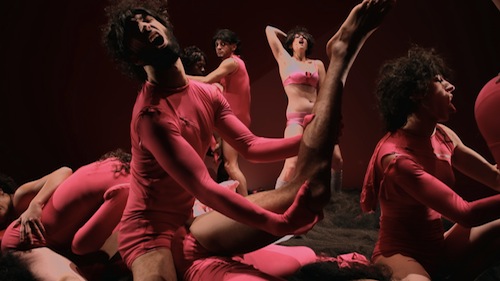 SIFF Take: Peaches Does Herself

You gotta love Peaches to love this film; and I do. Her music makes me wanna dance all night, get pissed, be fierce, make out, jump up and down, and do a ton of tequila shots.

In Peaches Does Herself, the rock star/punker/electronic Goddess takes her stage antics to new performance art levels; directing herself, dancers, and other musicians through a storified-approach to her songs involving hot pink underwear, spage-age costumes (which she peels off to reveal hot pink underwear), and simulated sex. Lots and lots and lots of simulated sex. Oh, and a little bit of blood too. OF COURSE.

Everyone's legs seemed continually splayed; and Peaches particular brand of art includes more representations of boobs, vaginas, and cocks (+ a few real ones) than most people are probably comfortable with. But that's the point, isn't it? Peaches is always trying to throw this stuff in your face in order to make a statement about it. Or maybe she's not. WHO KNOWS? And really, who cares — if it's fun? And I have to admit that it is! It's like a giant, decadent, dirty Vegas show, but with killer rock and roll songs that you actually want to listen to. Also: the wig budget for this thing must have been astronomical.

Starting with an announcer explaining terms like "Diddle My Skittle" to, apparently, a German audience, the film moves to two women belting out "Rock Show" with phrases like "SLUT" scrawled on their arms in sharpie, and then after you get see a parade of colorful, in-your-face images that include everything from Sandy Kane emerging from a giant satin vagina (complete with neon lights), to a shiny metal sculpture of a hand throwing the "shocker", to Peaches literally shaking her "dick" and tits … to a heartbreaking scene which leads to some pretty graphic mutliation of said dick and tits. (eeeessssh)

Godhelpme; I fucking loved it. I even chuckled all the way through Kane singing "I Love Dick" — which is actually a great big inside joke — a love ballad sung to "her husband, Dick." BWAHAHAHAHA.

I can't really explain why, but I love you, Peaches. For real. Fuck the pain away, indeed.

{Peaches Does Herself at the 39th Annual Seattle International Film Festival on Saturday, 5/25, 9:30pm, and again on Monday, 5/27, 9pm at The Egyptian}