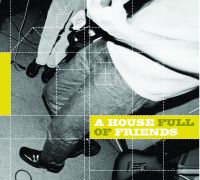 A House Full of Friends

The A House Full of Friends compilation pulls together two-discs worth of artists whom have performed at some point or another in a small SE Portland house where Mark Rothkopf and Curt Ketner, the founders of Magic Marker Records, lived from 1997-2004. Presumably, the house was usually full of their friends.

The liner notes call the record, "a historic document that tells the story of the beginnings of a record label and a start in a new city and a new house." In a time before all-ages clubs like the Meow Meow opened their doors, Portland was a tough place for up-and-coming bands to get a gig, so Mark and Curt opened up their house as a venue. The recent compilation includes a booklet of photos and a "How to Throw A House Show" instruction manual.

"These 34 songs," the liner notes continue, "represent almost all the bands that played at the Magic Marker house. Some have since broken up and others have gone on to immense popularity that would make a house show pretty much impossible."

The compilation is incredibly diverse, including unreleased tracks and alternative takes by bands like The Thermals, the Shins, Dear Nora, Tullycraft, and the Lucksmiths, and album tracks by the Decemberists, Mates of State, and the All Girl Summer Fun Band.

It plays like a really good mix-tape, and when played straight through it runs a huge gamut of soft acoustic pop (Dear Nora) to fast and hard rock (The Thermals) to sweetly ironic indie-ness (My Little Brother).

Overall, A House Full of Friends is an unexpected achievement in that it doesn't have the lopsided hit to miss-miss-miss ratio that a large majority of compilations (soundtracks included) fall victim to. If anything, standout tracks like Eux Autre's "Le Project Citron" or the Shins' alternate version of "Baby Boomerang" make the one or two misses irrelevant.