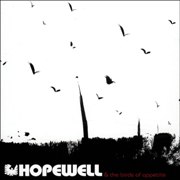 Hopewell & the Birds of Appetite

Jason Russo, lead singer and founder of Hopewell, says of their latest release, Hopewell & the Birds of Appetite, "(it) locates the spot where the personal and the universal intersect." The album's fusion of intensely introspective lyrics with staggering rock orchestration affirms this, and their strong melodies accompanied by a stirring, emotional musical foundation push Hopewell into the spotlight on dreamy, psychedelic pop.

Hopewell is hard to classify. Pop? Rock? Alternative? Instrumental? Um, yep. Their music heads in one direction and then abruptly switches paths, moving from gritty and hushed murmurs into a surging crescendo of horns and emotionally-charged instrumentation. The press seems to have keenly caught on to this pattern, enthusiastically calling out their inherent unpredictability as an indication of their maturity and sophistication. Like bands such as Muse and Mars Volta, Hopewell combines a variety of instruments, melodies, and volumes to create a style that crosses many genres.

Almost every song on this album illustrates Hopewell's ability to create this exceptional musical vision. "Trumpet for a Lung" spirals into an upswell of horns, piano, vocals, whistles, and more. "Praise Twice" reverses that order, abruptly breaking into an almost monastic, cooing chant before diving back into a more frenzied pace. "Synthetic Symphony" seems like an allusion to the band itself, with Russo crooning "and the synthetic symphony swirls around your knees…through your bloodstream". The dreamlike extension at the end of this song makes you want to crank the volume, roll your windows down, and drive fast. And "The Birds of Appetite" is a fantastically surreal one minute and 46 seconds of otherworldly, piano-twinkling, melting bliss.

Russo is no novice when it comes to musicianship. At only 19, he toured with Mercury Rev, planting the seeds for their producer, Dave Fridmann, to eventually produce Hopewell's new album. Spending time on the road taught Russo well. He learned how to boost the basic standards of live rock by adding both a greater variety and different styles of instruments, resulting in Hopewell's sold-out shows in renowned venues like NYC's Bowery Ballroom and the Knitting Factory. They are currently on tour this spring (with the Comas) and summer in both the U.S. and Canada.

Mike Ayres of the Village Voice said of Hopewell: "This band rewards those of us who like to pay attention." For those of you who tend to take note of ambitious bands that make beautiful rock records: watch out!