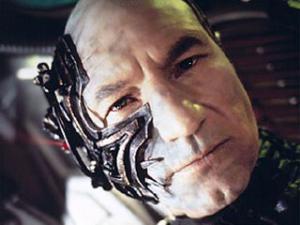 "How Could I Forget?" by the Faint

For some reason – well, I suppose there are actually quite good reasons – whenever I hear the Faint, I can’t help but think of the Borg. There are a lot of synth pop bands out there, yes, but really, none of them make me think “Locutus of Borg” like the Faint. It is as if the Faint have really, truly mastered the sound that would be produced by a robot-human hybrid, a cyborg or mandroid if you will. Of course, most people think of the Faint and they think of the fact that Conor Oberst was booted from band, but they ended up on his label anyway, touring with him in support of Bright Eyes Digital Ash in a Digital Urn. It is good to see that Conor made up with the machine-men of the Faint because I’m not sure he would have lasted too long against them.

That being said, I’d have to say that “How Could I Forget?” is one of my favorite songs by the Faint. It just reeks “post-apocalyptic” future although apparently being about much more mundane topics like social anxiety, drunkenness and emotions. No wholehearted charts of ‘assimilate’ or ‘exterminate’ here! They sort of mock their fashion sense, referring to themselves are being dressed the same as the girl beside the person to which the song is being addressed. It just sounds so bleak and stripped down – it is a little gem of robotic pop – cold, calculated and deliberate dancing to commence.