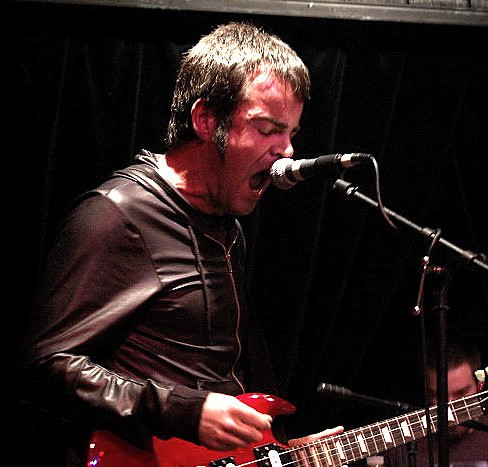 ...And You Will Know Us by the Trail of Dead

How post-punks like their post-punk: … And You Will Know Us By the Trail Of Dead and Future of the Left

You know a show’s crowd is divided when the headliners set is met with as many folded arms and quizzical looks as the openers. Or when aforementioned openers set boasts a more consistently full-up room, while the headliners suffered a fair amount of crowd attrition as the night went on. This last bit could easily be due to the fact that it was a work/school night and the morning is a cruel mistress, but either way, the . . . And You Will Know Us by the Trail of Dead/ Future of the Left show proved an interesting study in how post-punks like their post-punk.

Do you go for the wiry, brawny, start-and-stop (Gang of Four meets Jesus Lizard meets um, them) antics of Cardiff’s Future of the Left? Or do you like your vocals a bit more earnest, build-ups a bit more epic? If so, you were probably there for Austin’s . . . Trail of Dead.

Not that the two didn’t share any fans; there were more than a few people in the crowd who seemed well familiar with both outfits material and pumped their fists to both. FOTL were the designated openers of this tour, and their set was largely the same as their set at the Capitol Hill Block Party, focusing largely on their most aggressive material, even eschewing video-sporting sing-along “The Hope That House Built” in favor of songs singer Andy Falkous could chew the words and spit out in hoarse screams. “Manchasm” remained dancy even through its raw-throated delivery while set-opener “Arming Eritrea” was even more anthemic than on record. What crowd-members they couldn’t win over with their massive bass lines were converted by the bands’ banter (“We are allotted a certain amount of time in which to play and no amounts of irrelevant platitudes shouted from the crowd can change that. You’ve been a lovely audience, even though many of you are wearing hats indoors”) and by the time they closed with the 8 minute plus “Cloak the Dagger” they were covered in enough sweat to win a wet t-shirt contest.

After the Welsh trio’s display of poise and energy, the six-or-seven (depending on the song) . . . Trail of Dead’s material felt a bit staid and almost formal. Not for a lack of energy; the band opened with “Will You Smile Again” and immediately had a cadre of hardcore fans singing along. TOD varied between their new record and cuts from Source Tags and Codes, bringing the wash of sound with “It Was there that I Saw You” and during a raucous performance of “Caterwaul” (I swear I didn’t remember the song being that heavy on record) Jason Reece leapt into the audience while singing, made his way to the bar and did a shot of jager before finishing the song. Still, after a while of double-trap snare fills, piano breakdowns and clanging climaxes, the songs sounded strangely more samey than on record, not less. Which is a problem. It didn’t suck, by any stretch, but despite their evident passion, TOD are hardly the only band around going for Big, Sweeping Songs. But for the most part TOD were on their game. One only hopes that next time FOTL come to town they can play a longer set, and that maybe TOD can capitalize on their re-energized state with a few songs that strike closer to the bone. And that neither arrive on a work night.