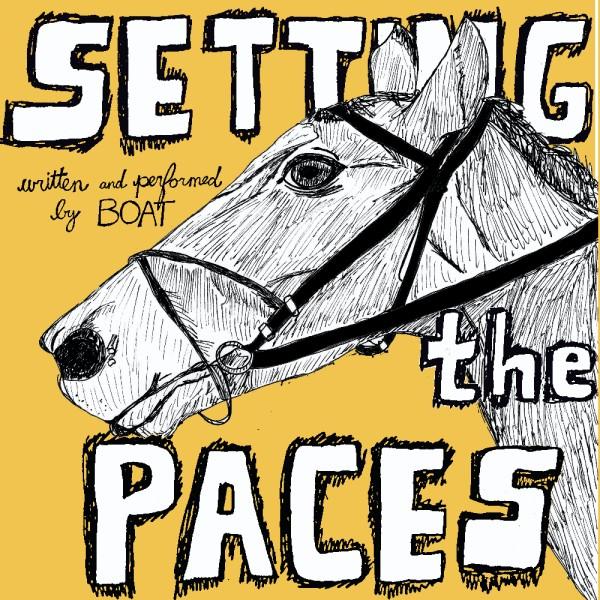 Pale Pacific-er and all around engineer super-star Cam Niklaus sat down with Dave Crane (aka D. Crane, guitar/bass/vocals/songwriting) and Jackson Long (aka J. Long, drumming/recording) for some insight into the world of reptile boy vocals and redefining imperfect pop on their latest release Setting the Paces.

Cam Niklaus (CN): Could you give us a brief history of boats origins and where it’s at now?

Dave Crane (DC): BOAT started as me making tapes on a [red] 4 track in Chicago. I would get home from teaching (and eat frozen pizza [and] drink regular Coke) and record songs. When I moved back to Seattle at the end summer 2003, I started making more and more songs in my basement. Z. Duffy (our now webmaster/east coast touring member/Chicago member) would trade tapes of songs we wrote with me [and] it was never intended to go beyond him. At the Pixies Bumbershoot reunion show, Mark McKenzie told me the songs were good. Josh Goodman joined (playing crazy drums and having babies) and we started recording for Magic Marker Records, a very cool supportive label in Portland. J. Long joined up in 07ish and has been the anchor for the band. He has a wicked work ethic [and] he has pushed us forward with recording and making sure we know the songs.  He is also an avid baseballer/cookie eater.

CN: Jackson, let’s talk about recording BOAT. I had the pleasure of recording basic tracks for several songs in addition to doing some mixing. Do you want to talk about the recording process with and without me? A lot of the recording was done at a house in Tacoma, right?

Jackson Long (JL): Our ultimate dream was to assemble a faux-studio in a spare room at Dave’s house in South Tacoma and chip away at LP3 over long weekends and evenings. It didn’t go down exactly like that and I, as defacto-producer, annoyed more bandmates, wifes and cats than I wanted to in the process, but I think it was worth it. We started recording (at Dave’s) during a weekend in February. I attempted to record my drum parts for a dozen songs in a weekend, while we had the gear we need – all cobbled together from multiple generous people.I thought I could power through and wear the “drummer hat” and “engineer hat” simultaneously. Not until 3 weeks later did I realize that some of the songs lacked the energy the songs should have.I suggested that we abandon a few nearly complete recordings….and try recording them new way. This didn’t go over particularly well with the dudes, but ultimately they were willing to try my new plan. I said: “Let’s go into Two Sticks  (the studio I work at) for one evening, with my friend Cam at the helm and try recording with all of us playing together.” This was BOAT’s first time recording in a proper studio and I think we were blown away at the efficiency and how much we sounded like ourselves. From this point, we took these “basic” tracks BACK to Tacoma, our space in SODO, Mark’s apartment, etc. and BOAT-ified them. As Dave says, “just turn them into a sloppy mess.”

JL: I am plagued by always wanting to be prepared, firing on all cylinders, dialed in… all things that BOAT definitely is not and will probably never be. BOAT will always be BOAT. We, specially D., always has new schemes he wants to try. Whether we get all the way there, or only 47% of the way, I like that we try to invent new things. BOAT shows tend to be full gimmickry, songs coming off the rails, etc – but I think it’s all in the spirit of trying to make some interaction between us and the audience. And trying to do something that is engaging and fun. In terms of making Setting the Paces, the battle for me was deciding what stuff was cool or satisfying and what was just sloppy and not serving the song. The major difference between STP and Let’s Drag Our Feet might be that there was a bit editing during the process. Not to say that there isn’t a slough of shakers and tambourines and vocal tracks.

CN: How do the songs get written? As in, does BOAT get together, begin to play and shape what comes of that, or do people bring ideas to the table and the band takes it from there or…?

DC: I usually make a bunch of demos in the back laundry room of my house. Sometimes I can make 10 songs in a weekend, sometimes it’s 2 songs in a month. I usually give the guys a CD of the ideas, or actually email them around with fake album art. There were the Diet Dr. Pepper Demos, the Daisy Mae (my wife’s dog) Demos, and the Bulldog Stuff Demos, the Cold Sweat, and the Michael Lerner Did Not Steal My Epiphone Demos that made it onto Setting the Paces.  I use more vocal effects and layering than the guys usually like.

JL: I realized that I was really influenced by the way Dave records demos. He uses a KORG D1600 and always has chorus+fuzz on his stacked vocal tracks. They come out super hammy and I usually either love them or they annoy me a lot! When we started doing the vocal tracks for the album I tried to match those effects. I would always run them super loud in the headphones to make it fun for Dave to sing.  We actually stuck with those effects for the final mixes “Interstate 5” and “Tulips.”

CN: Where do you all see BOAT 1 year from now? 5 years from now?

JL: Dave always says “who knows if this will be the last tour,” and then Mark and I laugh at him. I don’t think he actually believes that. I think it comes from a place of the band being really impossible to do given our situation. We are not a group of dudes living together in a house, working at coffee shops. Dave and Josh are both committed elementary school teachers that any kid would be lucky to have. 3 of us are married, 1 with kids. BOAT is a family affair. We have more than our fair share of inter-family squabble, but we make a good team. And the fact that we are regular dudes, with regular lives, makes for a good plot.

DC: What J. Long is not revealing, is that he longs to do a solo record. His voice is golden; he has a real 50’s sweet sock hop voice. I have no attention span. I bet the band breaks up and he does a really cool 50’s sounding album. Kind of a Ricky Nelson thing.

JL: Cam, Setting The Paces was primarily recorded in Dave’s house with its hardwood floors and perfectly echoy stairwell. Jimmy John’s veggie sandwiches were never more than a phone call away. What would be your ideal conditions for [your involvement in] recording BOAT’s next thing?

CN: I really love the fact that much of the recording was done DIY in a unique space. I’m a big believer in the idea that the limitations of a place or circumstance can be creatively inspiring. I won’t go into detail with my geektastic ‘new Star Wars vs old Star Wars’ analogy but, seriously…115 million dollar budget gives us jar jar binks? Having said that, when we got BOAT into Two Sticks (the studio Jackson works at) they were able to play together, which wasn’t an option at D. Crane’s place and there’s definitely something special about BOAT playing together. So much music is recorded one instrument at a time, which works…and works really well in a lot of cases but in some cases part of what gives a song life only happens when the people who made it, play it together and I think it’s worth while to try to capture that. It comes back to the imperfections… If each guy lays down his part separately each little mistake tends to distract from the song but, when you all play together, those same imperfections work together to give a song an energy that makes it interesting and endears us to it.

Want to harass BOAT more about their recording styles?
I’m sure they’d be happy to enlighten you at the merch table of their CD release show this Thursday at Neumo’s! And don’t miss your chance to win an awesome BOAT package featuring tickets to the show, a copy of the new album, a t-shirt, and a custom work of art by D. Crane himself!