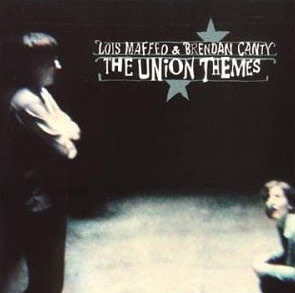 "How I Came to Know" by Lois Maffeo and Brendan Canty

A couple years after I graduated from college, I finally became "big time" enough to secure a spot as a freelancer on Denver's largest weekly rag. I didn't even last a year (a story for another day), and don't really remember much about the whole affair other than lots of frustration with my editor. I particularly remember three interview pitches being turned down, written off as focusing on bands that weren't really that important. The first was Dashboard Confessional, the second was Death Cab. The third was Lois Maffeo.

OK, so I might have been off on my predictions about Lois, but two for three isn't bad in this business. And, to me at least, this album still really holds up. Whenever I listen to her collaboration with Fugazi drummer/producer Brendan Canty, 2000's The Union Themes, I'm still shocked, and rather bummed, that this record didn't take off better than it did. I'll be the first to admit that I'm not a huge fan of acoustic singer/songwriter-y stuff; Maffeo and Canty take it so much farther than strummy coffee-shop fare on "How I Came to Know." After releasing a string of albums as Lois, Maffeo's command of an acoustic was never better. Here she jumps up and down, dropping into a coy, sliding melody that buries the singer/songwriter rhythm-guitar clichés in the first few bars. Canty's restrained, precise rhythms don't just flesh out the song, but propel it. And Maffeo's voice. Oh, her voice. She soars through a love song with the conviction and passion that takes her twee-perfect delivery into bigger, more adult pastures. I finagled a review out of The Union Themes for that paper, but that really deserving Maffeo feature was shelved in favor of God knows what.

Wikipedia says Maffeo now works as a press agent for some coffee company in Olympia, Wash. My former editor's moved on to something that suits her skill set better and got out of the newspaper biz. I'm left with the feeling that poetic justice only gets it right about half of the time.