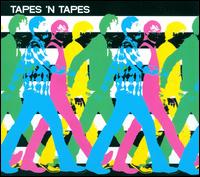 I don't know Dave Fridmann personally. I am fairly sure we have never met. Yet, for some reason, he must not like me. "Why" you ask, "would you think such a thing, Erik?" Well, Mr. Fridmann has now done a good job ruining two bands that I liked a lot. First came Clap Your Hands Say Yeah, whose sophomore album Some Loud Thunder defined "sophomore slump" and Mr. Fridmann produced a good deal of it. Now, he's laid his hands on Tapes 'n Tapes and sure enough, Walk It Off is a big step down from 2006's The Loon. The album seems bogged down, underproduced and lots in a haze that does not do the band justice.

So, in my research for this review, I did have to look up what sort of CV Fridmann's sports, and sure enough, he's a hot shot, heck, he's nearly a legend. He was in Mercury Rev, he's a spiritual member of the Flaming Lips, he's produced and engineered songs for Weezer, Mogwai, Sleater-Kinney. He was called one of Mojo magazine "100 sonic visionaries" of all time. Well, great. I know Mr. Fridmann sleeps well knowing all of these facts and more. So why am I so sorely disappointed with his work with CYHSY and Tapes 'n Tapes. I'm not really sure. Wikipedia notes that Fridmann "often brings a distinctive, expansive, open sound to the albums he produces…", so I suppose he's post-Pink Floyd, post-Phil Spector sort of producer and in many cases, that might be a good thing. It has seemed to work for the Flaming Lips. Yet somehow, with all of Fridmann's pedigree and skill, his efforts with some of the modern rock world's current (well, semi-current) darlings have just produced a mess. I think this goes to show that no matter who the producer might be, from Butch Vig to to Flood to Brian Eno to Jacknife Lee, it takes more than just a reputation and knob-twiddling skills to make a band sound great.

What is it about Walk It Off that has me so riled up? Well, for one, it sounds like it was recorded off the radio onto a beat up XL-60 cassette. This is exactly the same problem I had with Some Loud Thunder: it just sounded bad, whether it be on questionable iPod headphones or my Sennheiser "real" headphones. You felt like you were hearing everything from under about 2 feet of water – and admittedly, for some bands, that sort of "wall of sound", echoing reverb might work, but for Tapes 'n Tapes, it doesn't. Not in the least. "Le Ruse" opens the albums and it has a bit of Sebadoh feel to it, but it also feels like they're pegging the meters when they recorded it. What you get is just a soggy soup of sound instead of any real melody. "Time of Songs" starts off more promising, with some of the crispness that tracks like "Insistor" on The Loon, but it never reaches the same energy levels. You feel that "Hang Them All" might get there, but it just still has that sloppy sound that permeates the album. I could go on to list all the tracks that are serious trainwrecks of garbledness, but really, I think you get the idea.

There are a few songs that seem to survive the Fridmann treatment, like "Conquest," a slight rolling number. "Anvil" might end up being the high point on Walk It Off, where Tapes 'n Tapes takes it easy to create a sort of sleepy ballad almost sounding like it came out of the Calexico discography. The distant piano mingling with the guitars and synths might be the best thing that Fridmann did on the disc without destroying the true core of the song. Both of these songs don't get mired on overmodulation or overindulgence in dense sounds, and thus they sound fresher and crisper than anything on the disc.

Now, maybe Mr. Fridmann just was off his game for Tapes 'n Tapes and CYHSY, maybe he just didn't know what to do with the bands' sound, but now I almost fear what other bands he might try to mold. Whatever happens, I hope Tapes 'n Tapes return to the roots the next time around because Walk It Off is a step backwards for the band, an endeavor where they lost of their songs in the fog of sound, and they ended up just burying what the tracks might have offered in layer after layer of noise.