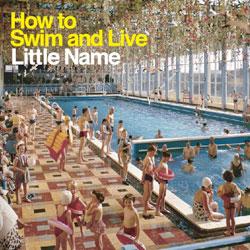 How To Swim and Live

Little Name is the chosen moniker of Lee Barker, a Renaissance man musician from Liverpool whose debut album How To Swim and Live takes the best parts of indie-pop and spreads them out over 11 songs.

A select few bands that could get away with an opening line like the one from "For The Attention Of," the album's first song — "I don't really care about you/I've just got this itch that needs to be scratched" — but when sung over a melee of jangly guitars, keyboards, and a reverb-heavy trumpet blasting out the melody line, it's hard to do anything but tap your toes and smile. What follows are a slew of 2 – 3 1/2 minute nuggets with a distinctly French pop sensibility.

"A Life Such As Mine" is the kind of song Alice might have heard when she fell asleep and entered Wonderland. Sweeping synths and muted trumpets provide a dreamy backdrop for the "la-la-la's" of the female vocals that appears a few times throughout the album to complement Barker's Stephen Merritt-esque vocal style. "Tracy & I" could qualify in my search for the best under-three-minute pop songs if it wasn't 41 seconds too long. Still, the xylophone riff and acoustic guitars are pure pop perfection, and the lyrics are nostalgic and cute without being saccharine: "The way I spoke, the way she looked/it was ideal/we both lived in a film/and she was Annie Hall."

How To Swim and Live could just as easily be the soundtrack to an afternoon lounging in the park with your sweetheart after your Camera Obscura records have all but played out. Listen to Little Name and you'll be wanting to grab the nearest cardigan-wearing someone's hand sooner than you can say "Belle & Sebastian who?"