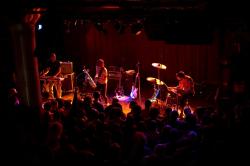 Menomena and Illinois in Boston

On a cold Friday night I went out to see Menomena, who I've long loved but never seen live, with a group of friends including Timmy Stardust (of Betsy-endorsed Boston band Antiques), whom I asked to be my special guest co-writer.

BB: As a huge fan of Friend and Foe, I was excited and eager to see how Menomena pulled off their sound in a live setting, having missed them due to illness the last time they came around. Before I get into how incredible they were, though — and they were incredible — let's talk about Illinois, the strangely incompatible opening act.

TS: I just got back from seeing No Country For Old Men and I'm in total bloodshock, but in a good way. Is that at all related to the mention of Illinois? Possibly. Maybe I wish that the antagonist of that movie would go see one of their shows and exact sweet revenge on them for the wasted time… and I'll stop there. Well, it's bad policy for musicians to talk poorly about other musicians, even in the context of a review. So in the place of where I would be tempted to leave negative comments and talk trash about the aforementioned band, I will instead try to think of some positives we can look onto:

1) They had nice haircuts and clothes.
2) The lead guitarist was on Cloud 9 and wore a tambourine around his neck (always a positive in my book)
3) They could play their instruments pretty well.
4) They were the opening band, so we didn't have to watch very much of them.

Is that enough? Take it away, Betsy.

BB: Yes! The tambourine around the neck was great. I think it should be a new fashion trend. Sigh… is that the best thing I have to say about Illinois? What I love about Menomena is how extraordinary and unusual their music is, so to put a terribly ordinary band in the opening slot seemed a very very odd choice. (Seriously, Mr. Tour Organizer, send Menomena on the road with Thee More Shallows. I beg you.) Illinois came onstage and, through generic kiss-ass remarks that the crowd wasn't buying ("We love you Boston! Go Red Sox!" x12) and a lead singer who seemed to have stolen his moves from the Maroon 5 playbook, they left a bad taste in my mouth. Their songs were fine but forgettable, until the singer, whose tricks included banjo plucking and singing through a telephone handset, started rapping. R-A-P-P-I-N-G. It felt like a bad poetry slam, and it didn't make any sense — in fact, the only thing it made was our skin crawl, and any compassion we may have had for this band went splat.

TS: I'd say I was a little disenchanted with all the rallying around the Red Sox. I'm a Detroit Tigers fan and I'm sorry to say that's just one more level where the lead singer didn't connect with me. Also, he had all this lead singer posturing and bravado… kinda made me throw up a little in my mouth.

BB: After enduring an hour of Illinois and a set change, we were delighted when Menomena finally hit the stage and busted straight out of the gate with full speed. Establishing the mood quickly, they set in to "Weird" right away and silenced the room with their intricate melodies. The three members were flush at the front of the stage, with Brent Knopf at stage left poised in front of a keyboard and carrying an electric guitar that was slid around to his back when he wasn't playing it, Justin Harris in the center playing bass, sax, guitar and various effects, and Danny Seim at stage right behind a drum kit. The trio shared vocal duties, and lush vocal harmonies abounded. They each displayed musicianship beyond what most bands are capable of; I don't know the backgrounds of the individual members but I'd be surprised if they weren't all music school grads, given their incredibly complicated compositions and how masterfully they each played. They struck me as virtuosos, not something I expected but not surprising either.

TS: Getting back to No Country For Old Men (only because it left the same lasting impression on me as this show), Menomena came off like firing rifles, with colors, eerie mood sounds, and haunting lyrical themes. But, like the movie, they were also flawed, like most great works of art. I have one or two small gripes. It seems they enjoy this kind of mix, but the piano was sometimes too loud for my tastes, obscuring some of the intricacies in the songs, particularly on "Wet and Rusting" which fell a little flat for me. It needed the drive of his acoustic guitar, replaced by a muddy and hard to hear electric.

But, the faults were few and far between. "Rotten Hell," the most subdued moment of the evening, was still uniquely powerful in the way that only a Menomena ballad can be. Stick flailing and pedal stomping really accelerated the show and gave new life to already lively arrangements. "Boyscout'n" hit dead on early in the set, giving the version from the album much more energy and volume, subsequently blowing all of our hair back. I think I even saw normally subdued Betsy swaying to this one.

BB: Yes, you probably did. Normally at shows I am singing and dancing along in my head while maintaining my outward cool, but I definitely couldn't resist the force of their music. They played for over an hour, presenting the majority of their material much to the crowd's excitement. Complementing the dramatic sonic layer was an inspired lighting scheme that playfully mimicked the dynamics and rhythms. Their focus and clarity was refreshing; these didn't seem like guys whose rock star dreams were fueled by the promise of chicks and booze, but instead like truly gifted musicians who couldn't (and shouldn't) possibly NOT be doing this. They were genuine in their interaction with the audience, constantly expressing their appreciation and seemingly surprised by the roaring reaction after each song. They were just all-around stand-up guys.

TS: I was definitely expecting some surprises, some improv, and some prog out of this show from the CD, but what floored me more than anything was the precision in feel. What I mean by that is that a band plays tour dates throughout most of the year in support of an album and they will not always be great. They may not always find a way to get excited about a show. However, one could've fooled me into thinking it was their first show of the tour. The energy was there, the sound was great, they were tight and focused, and they way they played transcended a lot of the space in the room. It didn't feel like the music came from the stage, but instead, from all around us. It really made me put away any reservations I had about the trio setup, which I was worried wouldn't be able to accomplish the depth set forward on Friend and Foe.

BB: I glanced over and spotted Timmy playing air keyboards during one song, and that was the sort of effect Menomena seemed to have on everyone: a hypnotic kind of bliss. Aside from the drunk douchebag next to me and his girlfriend, people seemed completely entranced by the show. I myself just kept watching Brent in awe as his fingers attacked the keyboard. Most impressive to me was the group's collective timing; with a repertoire that celebrates unusual and unexpected beats and melodies, they never once appeared to miss an abrupt change or a complicated instrumental interplay.

TS: Entrancement is a good word, Betsy. I could at one point, probably during "The Pelican," look down from our booth perch and see everyone's heads in the colored lights kind of nodding back and forth to the beat. That was a nice moment. They had the crowd on their side without a single mention of the Red Sox! That's a bo
nus!

BB: Yeah, go fig! I could have watched them all night; in fact, I'd quit my job if I could make it my full-time job to watch Menomena. They far exceeded any of my expectations. They may well have just become my favorite live act I saw this year. (*Other than Antiques, of course.)

TS: I would agree if I hadn't just seen Mount Eerie about a week before. But, that's another story for a different day. Menomena, unlike its Muppets counterpart, was powerful and cerebral, sticking with me in a difficult to describe way that only the best intangibles do. Hint hint: Check their tour schedule and see when they're coming to your town to find out what I'm talking about… or just go see *plug alert* ANTIQUES AND BUY ALL THEIR ALBUMS!! *plug alert*