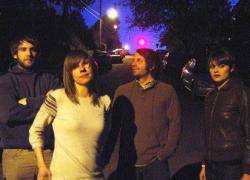 Band to watch for: Hungry Pines

In this city so saturated with music, it seems if you’re not in a band then you at least know someone who is. Sound-alike bands abound in such an atmosphere. The Hungry Pines have overcome the mold with a seamless blend of two different genres: classic rock and indie-pop, creating a sound to separate the four piece from their peers. They headlined at the Comet Tavern, Thursday May 31st, and although the crowd was dwindling by the time they took the stage at almost 1 in the am, you wouldn’t have guessed from how loud those who stayed hollered between songs.

The band is not undeserving of such a response either; besides having a unique sound, they put on an amazing show. With his dancey beats, the indie-pop sound is heard through Lucas Carlyle’s drumming style. On the other hand, Chrysti Harrison’s guitar leads carry heavy instances of classic rock. Yet it’s in singer Irene Barber’s vocals where the two genres of rock and pop really combine: Imagine a female Robert Plant mixed with Gwen Stefani’s early years. During the show, it was hard to keep your eyes off Irene, as her animated facial expressions and body language conveyed the emotions in her words. Well, it also doesn’t hurt that the singer/guitarist is completely adorable to boot. Bassist Bryce Shoemaker had a peculiar stance during the show: He stood far from the band while facing them for short intervals, making him appear to be part of the audience.

I met up with Bryce over some Mexican beers to get an insight on the up-and-coming band. He confirmed the classic rock and indie-pop influences stating, “Our influences include Led Zeppelin, particularly John Paul Jones, more classic rock, the Anniversary, 31 Knots, Q and not U, and the Sea and Cake.” Although he’s only been a member since September of last year, the band has been together for two years now, coming together from previous local bands. Chrysti and Irene were in the band Conversation Heart, and while recording at Bear Creek, met Lucas who is a sound engineer. At the same time, Joules [another band Bryce is the guitarist in] played a show with the girls and also recorded at Bear Creek.” While the other three formed the Hungry Pines, Bryce stayed friends with them, playing a show with the band in his other band, Bronze Fawn. “Hungry Pines needed a bassist, and although I play guitar, I told them I’d join.”

While the Hungry Pines is the girls and Lucas’s sole project, Bryce still plays with the other two bands. Impressed by their fresh music and solid set on Thursday, I decided to catch them the following Saturday at the Georgetown Music Festival. Word of advice if you’re riding the bus to an unfamiliar part of town: Check a map beforehand to know where to walk once at your stop. Otherwise you could end up lost wondering a residential street. Not that I would know personally or anything… But luckily if that had happened, the festival was heard from blocks away, allowing me to follow my ears there just in time to run inside the Jules Mae’s Saloon the literal second the Hungry Pines were striking first notes.

This time around, perhaps because it was mid-afternoon rather than midnight, the band was somehow even better than the show prior. This sound guy was also more attuned than at the Comet, making Chrysti's Zeppelin-esque riffs sound crisp and pronounced. Bryce again stood a distance away from the band and at an angle. Maybe this is his signature move? The decor of the Jules Mae’s Saloon looks like someone‘s grandparent‘s living room [complete with floral wallpaper and grandfather clock] and while mixed with the band's laid back indie-pop aspect, made the set almost feel like a house show. Between their two shows, the second half of their festival performance is where they really shone. Saturday was an unbearably hot day, visibly taking a toll on the band. Despite this, they didn’t rush the ending or fall apart. Rather, the band’s already fine-tuned solidity became even more cohesive, producing an electric energy nearly visible between the musicians. The lead in to this portion of the show was “Blood Eagle,” which is undoubtedly their best song. Being a relatively new band, I asked about being part of a festival. Apparently they have a connected fan base: “Someone liked us on the planning committee, and invited us to play.”

And which other festival performers were Bryce’s picks? “Iceage Cobra was my favorite, but I also enjoyed Skullbot and Tiny Vipers.” He said if the opportunity arose, the Hungry Pines would perform another festival. What else is in store for the promising local band? “We’re recording our CD later this month in Lucas’ basement, using his engineering skills. Playing more shows, and seeing where it leads us.” You can catch the Hungry Pines' next show on June 29th at the Mars Bar, which I highly recommend. Because, not to get cheesy, but once you hear this band, you’ll definitely be hungry for more.