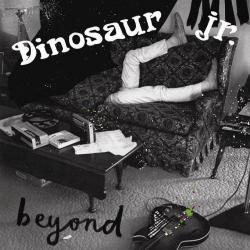 It has been almost 20 years since J Mascis and Lou Barlow recorded as the venerable Dinosaur Jr. Sure, Mascis carried on with the Dinosaur Jr. moniker while Barlow formed a band you might have heard of called Sebadoh, but listening to Beyond you wonder why they ever split up and what took them so darn long to start playing together again. The album has all the energy of what you might expect from rockers half their age and Dinosaur Jr. churn out an album that lets you (well, me) relive my youth while still sounding fresh and exciting.

The best thing about Dinosaur Jr. has always been the way they can sound like it took absolutely no effort to the record the song. It's almost as if they show up at the studio, start playing, songs write themselves, and suddenly they have a new album in the can. Maybe it's the laidback vocal style of both Mascis and Barlow, but there is such an ease to a good Dinosaur Jr. song you at the same time feel you could record the song and that it would be impossible to repeat. And somehow, in their first collaboration since 1989, Mascis, Barlow, and drummer Emmett Murphy hit it in stride from the very first moments of “Almost Ready,” a free-wheeling Mascis song that is as archetypal Dinosaur Jr. song as has ever been recorded. The song just careens along jumping back from the guitars riffs to Mascis’ slurred out vocals. Many bands spend their whole career trying to mimic this style of effortless modern rock and never come close, so to hear Dinosaur Jr. return to it like they never left is remarkable.

The opener isn’t the only song that recaptures the dynamism of early Dinosaur Jr. “Back To Your Heart”, with Barlow on lead vocals crushes along, yet thanks to Barlow’s voice, doesn’t get lost in the rough guitars, instead it stays oddly charming (and shows that Mascis is making up for his past mistakes by letting Lou even have a couple of songs of his own under the Dinosaur Jr. name). Barlow’s other song, “Lightning Bulb” is more Sebadoh than anything, but it has more growl than we’re heard from Sebadoh, probably thanks to Mascis and Murphy’s strong rhythm section. Slower songs like “Crumble” somehow encapsulate the sounds of both Dinosaur Jr. and Sebadoh (which, I suppose, isn’t surprising), with Mascis’ lazy vocals dripping over the guitars. “This is All I Came to Do” captures the slacker genius of J Mascis, as it opens with the towering guitars that lead to Mascis’ indistinct vocals that have as much drawl as anyone from Massachusetts should have any right. “Been There All the Time” is a Dinosaur Jr. rock anthem, built on the same frame as “Feel the Pain,” with the song-long guitar solo that keeps the song afloat as Mascis pitches water with his half-howled vocals before the roaring chorus takes the song to its proper heights. If anything, just hearing this song or “Almost Ready” will make any of us in our late 20s or early 30s feel like its 1991 all over again.

A couple misstep can be found, like the overly aggressive “It’s Me,” which just seems out of place in the footloose Beyond while the sort-of-pleasant “We’re Not Alone” is just a little too restrained to feel. However, the same might be said for “I Got Lost,” yet something about the way the song is constructed makes it seem like less of a misfit child on the album, with the odd out-of-tune harmonies and the rolling drums. The album closes with “What If I knew,” a bittersweet reflection from a band that has never gotten its proper due – then again, maybe they just like it that way.

It is hard to not compare the return of Dinosaur Jr. with the return of Galdalf the Grey as Gandalf the White, most thanks to J Mascis’ startling white locks, but the comparison is apt. Dinosaur Jr. have always been the D&D playing slacker nerds from down the street who disappeared into their basement the minute school got out. Sure, they’re smart and could be successful, but really, that takes more work and would be less fun than just riding the slacker inertia. To some, it might seem odd that after all this time that Dinosaur Jr. would reform – heck, with the success of the Pixies revival it could easily be seen as a chance to get some of that prize – but really, it feels more like some guys who knew that someday they would have to come back together to finish some business. Whether or not this is the last journey of Dinosaur Jr., we’ll have to wait and see, but Beyond is far from a throw-away reunion.