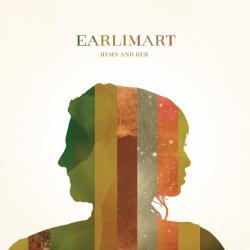 Mentor Tormentor, the 2007 release from LA indie staple Earlimart — and the band's first album on label imprint Majordomo Records — was one of my top 5 favorite albums of last year. So the minute I got my hands on the advance for this new record, I knew it would take a lot to top their previous effort. But in all fairness to the band, they seem to have approached this new collection of breezy indie rock tunes from an entirely different angle. Gone are the sweeping strings and atmospheric vibe that penetrated every; the album's title couldn't be more fitting, as the sound is really just stripped down to the essence of "hymn'' and her, or Aaron Espinoza and Arianna Murray. Both singers have an exceptionally lulling and angelic way about their vocals, and it works the best on songs like "Teeth," with the "oohs" and "aahs"

Espinoza's vocals sound oddly out of place with typical, straightforward rock songs like "For the Birds," "Face Down in the Right Town" and album opener "Song For." But he, and the band in general, is at his absolute best with the more haunting, quiet and introspective "Hymn And Her" and "Great Heron Gates."

Murray proves to be the band's secret weapon, taking the reins on only 3 of the 14 songs, including "Tell Me" – a lyrically awesome song in only 23 words: "sitting at a traffic light I've waited on one thousand times/it suddenly occured to me that you were never gonna tell me." Piano-based "Before It Gets Better" and synth-heavy "Time For Yourself" are two of the album's standout tracks, no doubt because Murray carries them so beautifully.

It's only been a year since the duo released Mentor Tormentor, and it's possible to guess that the band could have spent more time on these songs, only that would've defeated their ultimate purpose. The only real pitfall is when it sounds as though the band wanted to break through to something bigger but held themselves back, and fell just short. Still, while the album is not totally hard-hitting, the songs tend to sneak up from behind and lightly tap you on the shoulder, causing you to lend and ear and give a listen.