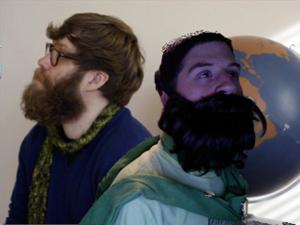 The Long Winters and BOAT will be playing together on July 5 at the Showbox at the Market so we thought it'd be nifty to gather two of our favorite leading indie-rock men in an imaginary room and have John Roderick of the Long Winters to take a swipe at some questions posed by D. Crane of BOAT. But the fun didn't stop there. Roderick, being the inquisitive fellow he is, had a few questions of his own…

Don't miss the Long Winters at the Showbox in the Market this Saturday, July 5th, when they play with BOAT and the Cops. Rumor has it that the Long Winters will be debuting new songs from their forthcoming album, which makes it a sure don't miss show.

JR: Does BOAT ever wonder what it's all about? If so, has BOAT come up with anything?

DC: BOAT often wonders what it is all about. Surely, and fairly cornily BOAT thinks it is all about having fun. If you make a mistake , if your lyrics are to precious, if you play a bad venue(see The Brainwash Cafe in San Francisco), if you don't own cool jeans to wear at the show, it can all be forgiven by having fun on-stage and bonding over band pizza/burritos. Does that sound too Steel Magnolias???

JR: When the chorus comes around, does BOAT ever get too excited and go a little over the top?
DC: Who have you been talking to? Our whole trick is overextending ourselves on the choruses. If one is not breathing hard with a red face, it is not really a chorus. It would be a departure for us not to go "over the top" on a chorus. Speaking of that fact…I saw this band on the Seattle Burn to Shine DVD and this guy totally went over the top on almost every chorus while playing lead guitar with a whammy bar…and I felt like it made an already really good rock song, better. I can't remember the name of the band though. The guy had a crazy beard. That's all I remember.

JR: Can BOAT name one positive result of the Norman Conquest?

JR: Where does BOAT see itself in relation to actual boats?

DC: BOAT aims to be the first Google search result that comes up, if one types in BOAT. Right now….this isn't so. Right now people seem to be bigger fans of actual boats. This has been a hard pill to swallow.

JR: If BOAT were a Dungeons and Dragons character, what would BOAT's alignment be? Discuss.

DC: J. Goodman (BOAT's multi instrumentalist/mentalist) once said that he desired to be a badass unicorn. Although I am not sure he was a D&D player…I dare someone to try and roll some combination of twelve or twenty sided dice, that can kill a badass unicorn. He also specified his badass unicorn would be black and white. No purple horns on this one. If it were up to me, I would choose to be J. Goodman at D&D (red beard, glasses, a curly ponytail, dressed in a metal codpiece and carrying a sword shaped like a J), because he is the toughest negotiator in indie rock and roll history. If it is 2AM in Minneapolis and you tell him that a room at Motel 6 is $69.99, I'll be damned if he doesn't find a way (AAA discount/vague threats/a scary scowl) to get each person in the band his own bed for $44.99. His alignment is "strictly badass."