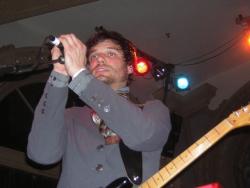 "I Saw Them When"

What could possibly motivate a couple of college students to embark on a one-day, 360-mile round trip drive from Seattle to Portland and back again on a school night? What in the world would be worth draining the meager billfolds of our theater student budgets for the sake of pricey gas and enough junk food to last us through nuclear winter? Either A) we were absolutely insane, B) we were bored out of our wits, or C) there was a damn good concert going on down there (or, perhaps, all of the above). Give up? I'll give you a big hint: on President's Day, Portland natives Tea For Julie, Stars of Track and Field, and The Thermals each took the stage of McMenamins Crystal Ballroom for 94.7 KNRK's aptly titled "I Saw Them When" concert.

By the time my friend and I arrived at the Ballroom, the crowd was eagerly buzzing with anticipation. I wove my way through the compacting crowd to the edge of the stage, and soon afterward Tea For Julie were all ready to get the show on the road. Of the first seven songs they played, all but one — their KEXP single "Hello" — were brand-spanking new numbers. "Hello" was wowing as ever, especially toward the end when vocalist Michael Deresh began sailing his series of falsetto hello's over the echoing arpeggios of his guitar.

The new songs were equally impressive. Their third song, "Big Difference," was performed so energetically that at one point bassist Denver Warner's pick went flying several feet from his hand, and he proceeded to finish the tune with his bare fingers as if nothing had happened. Around halfway through the show, Jad Simpson abandoned his drum set and placed himself in front of a metallophone, with a mallet in one hand and a tambourine in the other, and the band played a beautiful new song called "Snow Globe." With Simpson away from his drums, the song began with a prerecorded drum track, which the band accompanied with a smooth, cool rhythm of reverberant keys and strings. The dynamic sound that Tea For Julie fostered while writing and recording Division was on full display in their new material, and the continual sense of sonorous experimentation in the music they've written since — with the help of [relatively] new guitarist Travis Stanek — has given the band a whole new breadth of possibilities. My personal highlight of the set was when Deresh dedicated their next song to everybody who had trekked from Seattle, and then went right into "1000 Colors" (my favorite Tea For Julie song). I could have died happy right then, but thankfully I didn't, because there were still two more wonderful bands to come.

Stars of Track and Field were next, dressed in their Monday best. During the setup interval before their set, Jason Bell was to my right, shaking hands with a few enthusiastic fans while Kevin Calaba was to my left demonstrating the different effects of his various guitar pedals to the crowd in front of him. These simple acts exemplified the deep sense of accessibility and connection between the crowd and the performers, and this breaking down of the fourth wall was a theme which permeated throughout the concert, much to the pleasure of the audience.

Once everything was ready, Daniel Orvik started off with the eight quick drum pounds which signify the start of "Say Hello," and the set was underway. As bronzed and polished as their recorded work sounds, that's how brisk their live performance was. In fact, it surprised me how different they can sound once they shed their veneer of production. Calaba's voice, naturally rich with sympathy and vulnerability, perfectly befitted the bare bones sound their live show offered, though unfortunately the harmonies which accompanied them (arguably one of the band's best traits) were sometimes lost in the mix. Bell's guitar solos had a raw, brazen, and somewhat improvisational feeling reminiscent of grunge before it became the rad thing to listen to. I can only hope that if Stars of Track and Field become the next rad thing to listen to, they won't lose the band-next-door quality of their live performance.

Coming into this concert, The Thermals were the band I had known most recently, learned the least about, and heard the least of. Walking out of this concert, they became one of my favorite live acts. There's something about a great punk show that just releases all of the stress we all have bottled up, carbonated, and shaken inside of us. There's a certain beauty to the "my sweat is your sweat" mentality of a crowd that completely loses its sense of politesse (not to mention hygiene) to the steam engine of sound coming from the stage.

The Thermals' performance was an adrenaline-injected, irreverent yet levelheaded force of human nature. They were natural crowd-charmers, directing the banging heads and mosh pits that were unleashed in front of them. At one point, the crowd began a chant of "PORTLAND! PORTLAND!" which the band embellished with a ridiculously amusing impromptu accompaniment (I wonder if this little number will make the cut on their next record… they did suggest as much, if only jokingly).

Though they are great live, The Thermals don't seem to expose their best qualities, and though that may suit punk it doesn't serve them as musicians. Musical intricacies, which were usually inundated by ordinary bar chord progressions and major-scale melodies, seemed to come secondary to the energy of their presentation. Even further understated were the admirable internal rhymes and assonance of the lyrics, which were buried far beneath the overwhelming volume. Perhaps that is one of The Thermals' most interesting attributes: many of their best qualities are just below the surface, and only those who pay special attention to them can fully appreciate their music as more than just fun punk songs.

I had never been to Portland for longer than it takes to pass through it, and as far as first impressions go, this was a damn good one. There's more to this city than meets the eye, and it seems to be meeting my ears one great band at a time. So keep an ear out for what this city has to offer, and someday you too will be able to say, "I saw them when."