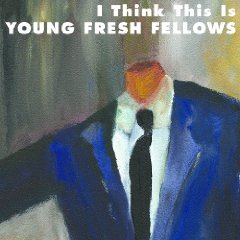 I Think This Is

It would be enough for an artist to release a great album from his own group while helping out a huge, still vital band like REM create new, meaningful music since the mid-90s. But Seattle-in-Portland-exile (well, that’s how I see it) indie rock originator Scott McCaughey simultaneously released a mighty fine Minus 5 full length just as his reunited OG band the Young Fresh Fellows put one out too. And it turns out that if I Think This Is was released by itself in any year, it would have been considered a come-back coup for the caustic troubadour. On top of that, McCaughey, Steve Wynn (Dream Syndicate), Linda Pitman, and REM’s Peter Buck (!) have just released The Baseball Project, a spritely whole album dedicated to their baseball fandom. That’s sort of like McCaughey’s version of Sandinista! separated into three different releases with three different bands and no Mikey Dread or kid’s choruses. Wow. (Key tracks on The Baseball Project: “Ted Fucking Williams,” “Sometimes I Dream Of Willie Mays,” and “The Death of Big Ed Delahanty.”)

The Young Fresh Fellows themselves, which according to their My Space has been “Tad, Jim, Kurt, and Scott since 1989,” helped continue the evolution of The Sounds of the Pacific NW (name of their first release, BTW), connecting The Sonics and The Wailers to The Posies and Death Cab with that sweaty, fun, beer-soaked, Puget Sound-smelling, back-yard stomping garage band life. But not without topics that occasionally bluntly hinted at the dark streak of mold in the damp basement nearby. Though early light hearted romps like the hilariously flippant love letter to “Amy Grant” just as the CCM artist was getting Rolling Stone coverage, and songs like “Shake Your Magazines” and “YOUR Mexican Restaurant” filling out the second half of I Think This Is, hubris has always been the main target of the guitar-grinding, hand-clapping power pop anthems. McCaughey doesn’t spare himself when going for the plump jugulars of inflated egos and moronic business as usual types. This venom may keep the sunny indie fans from following, but in spite of the sarcastic cheer in the YFF sound, it never stops rocking.

The surprise this time is, even with the self-referential black humor and inclusive odes to their own tenaciousness (“After Suicide,” “Ballad of the Bootleg,” respectively), on I Think There Is there are also realistic glimpses into goodly-humored survival and art-making with friends, as in excellent album opener “The Guilty Ones.” Musically, the YFF probably wouldn’t have existed without the Beatles, but the band they remind me of most is an Ecotopian Kinks; little details like McCaughey having ice cubes in his freezer (“not everybody does”) for pals who come over to play his “thousands of tambourines” recall Ray Davies at his descriptive best. “Lamp Industries” and “Such Machine Crater,” the vitriol against the assholes in the music business in the top half of this CD, are actually melodically more compelling than the more ballad-based simultaneous Minus 5 release (so that I recommend this one more). But my favorite track may be the giddy-sounding duplicitous cheer for “Go, Blue Angels, Go,” which wishes the Air Force stuntmen would fly, fly, fly into the hydroplanes racing in the Emerald City waters nearby, killing them all and the touristy noise we have to endure every summer. Yeah.