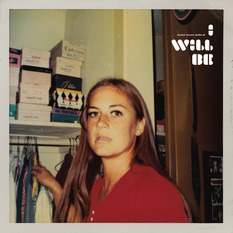 After a saucy seven inch and a couple of cuddly EPs, Sub Pop is releasing the eleven song full length by Los Angeles’ own Dee Dee, AKA Dum Dum Girls. “Dum Dum Boys” was an Iggy Pop tune, and I Will Be sounds like an LP Pop would have grown up speeding and bleeding to at backyard Michigan parties if drum machines and openly assertive party girls could go back in time.

If you heard those earlier, shorter releases on HoZac, Captured By Music, and Zoo Music, you know what Dum Dum Girls do: Sweet, dense basement femme power pop but with a Nico on the four-track vibe. Dee Dee herself sounds like she grew up on her parents’ girl group LPs and bummed vanilla cloves, New Wave French cinema and imported Japanese rice candies.

Dum Dum Girls pretty much is Dee Dee, but assistant Andrew Miller smears charcoal guitar along the white vinyl uppers of “Bhang Bhang, I’m A Burn Out,” “It Only Takes One Night,” “Rest Of Our Lives,” and my favorite song here, the slower-tempo, mid-60s devotion “Rest Of Our Lives.” The Yeah Yeah Yeahs’ guitarist Nick Zinner grinds out a bit for “Yours Alone” on guitar too, and Dee Dee’s husband Brandon Welchez (Crocodiles) strums as well, and sings a duet with his mod mate on the very funny and odd “Blank Girl.” Because this is El Lay, a sincere but still shiny Sonny & Cher song rounds out the half hour set, being the only near-ballad in the bunch.

I do have to throw in my own leap for joy here, in the return of Richard Gottehrer, co-producer and co-mixer and no doubt studio muse. Even if his contact with Dee Dee was basically in blessing her home demos in name and levels only, it’s a magical name, one that’s also on many of my and no doubt her favorite records, such as The Go-Gos and Blondie first albums. Gottehrer founded Sire Records with Seymour Stein, giving us The Ramones and so many other great “alternative chartbuster” bands that I’m hoping this will be his return to planet pop. His association with Dum Dum Girls’ I Will Be makes it doubly a debut to cheer about.