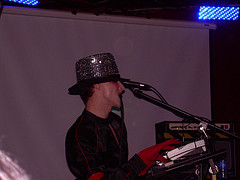 Songs of an Imaginary Being: IAMX on Halloween

According to Wikipedia, Chris Corner’s dark, sado-masochism-heavy persona of IAMX is “very different to his actual, real-life personality and is a kind of quasi ‘act.’” If that's true, it makes for an ideal band to play on Halloween evening at Chop Suey. Even if it's not true, it's still fitting that IAMX (pronounced “I am X”) found their way to town on October 31.

Corner is a former member of the Sneaker Pimps, and seems to relish the Marilyn Manson meets Depeche Mode act he’s put together. Thematically, the above disclaimer makes sense because the songs Corner has written for this project often involve characters letting go of inhibitions and seeking pleasure (mostly sexual, sometimes chemical) in avenues someone would normally consider taboo. He’s touring (with a full band) in support of his second album, The Alternative.

Chop Suey had booked a night of comedy afterwards, as part of its regular Laff Hole night, which has become a regular event on Wednesday nights. Hence, this show began earlier and was finished shortly after 9pm, making for a pre-funk of sorts for many people’s Halloween parties. The club was probably about 70% full – with the show being early, on a Wednesday night, and a Wednesday night with lots of great shows, that was quite an accomplishment. And judging by only having one bartender working at the time, the attendance was higher than expected. It was nearly an even mix of men and women in the audience, which I guess is irrelevant since IAMX songs treat gender and sexual identities as fluid. For what it’s worth, a large minority of the crowd was in costume. IAMX as a band played for a little over an hour, mostly playing songs from his most recent album. The songs on the set list were the most upbeat in the band’s catalogue, ignoring most of the ballads. The band members all sounded energetic and rocked a little more than they do on the album and the crowd appreciated that.

IAMX has crafted as an elaborate stage setup as they could for playing small clubs on smaller stages. They had a video screen project images behind them and made full utilization of a strobe light.

Sometimes the act was a little much, though. The songs are mostly well-written (if not more than a bit derivative) and overall, the band sounded good through Chop Suey’s PA, but Corner’s minimal banter was hard to decipher and mostly came out mumbled. Plus the time it took them to return to the stage for the encore was inexcusable. Trying to milk the applause for about 5 minutes, many in the crowd stopped cheering and gave up after a couple of minutes. Yet, the encore was inevitable because we watched a roadie tune the guitars in anticipation of the band’s return. It was pretty close to contemptible towards an audience who chose to be there on Halloween night. Still, once they did eventually return, no one seemed to mind. If you can’t act like a self-obsessed rock star on Halloween, of all nights, when can you?

1. Song of Imaginary Beings
2. Your Joy is My Low