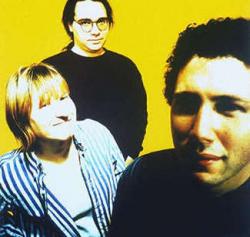 Yo La Tengo at Town Hall

Let me start by stating that Town Hall is a really cool venue and I'd like to see some more shows there. I didn't know it was an old church, and it has beautiful coved ceilings, stained glass windows and gorgeous molding and detail on the pillars. The only thing that's a little unsettling is that everyone has to sit in pews and the room is fairly well-lit. My friends and I had took the as-yet-unoccupied first row on the side and had an unobstructed view of the stage. From what I can tell, the acoustics are pretty good all around the room. I was really glad to be there, as Yo La Tengo can always be counted on to pull off some interesting and intellectual concepts in their shows. They don't limit themselves to the standard gig every time. I wasn't actually sure what this show would entail but I anticipated something satisfying, regardless.

The crowd listened politely to the opening act, classical guitarist Richard Bishop, although I caught plenty of barely stifled yawns and people napping on their partners' shoulders. Yo La Tengo took the stage and got right to it, the first song "Big Day Coming" was sung by Georgia, backed up by Ira (who was a little flat). Next was a song off the band's most recent full-length …I Will Beat Your Ass and had great drumming from Georgia, more intense than the recorded version. The whole song translated very well in the Town Hall setting, especially the harmonizing between Ira and James.

After the first two songs, Ira introduced the concept of this show to the crowd: "We're just here to correct any misconceptions that may have come up in the last 23 years." So of course, the first question lobbed at them was "Who cuts your hair?" Genius…

Basically the concept was that the band would just freestyle off of whatever the audience asked and throw their own little anecdotes in whenever it suited them. Someone asked a question about Tom Courtenay films, so Ira told a little story about how the band recorded the song "Tom Courtenay" in 1995 in Seattle and then ate at 13 Coins after. And then they busted into the song. The guitars sounded really nice on this one and it was way more understated than normal. Recorded, this isn't one of my favorite YLT songs, but in this setting it was really nice.

Additional questions lobbed at the band throughout the night:

Q: How do you feel about the Mets late-season lapse?
A: It's freed up a lot of our time

Q: Who would you most like to play with?
A: Ira wouldn't commit but mentioned people they've already played with as having been a great honor: Ray Davies, Sun Ra, Yoko Ono, David Byrne

James was asked about his record of Prince cover songs: "Apparently you don't have to ask permission to do it but the record is now deleted forever, removed from all record stores, the end!"

And we found out that Georgia and Ira met at a show on the fourth of July and met James a few years later when he played for a band called Christmas, which later became Combustible Edison.

It was actually a really long set, 21 songs in all, including the encore. The whole show was really laid back and we got to hear a lot of variation on a lot of great songs. Highlights were a slightly speedier version of "You Can Have It All," "Our Way to Fall" with a lovely guitar solo by Ira and a really long lead-in with deep, balloon-y bass lines. Fantastic. They also rocked "Upside Down," "My Pledge of Love," and "False Alarm," which I always love. Ira managed to make the acoustic wood sound pretty electric. There were lots of nice little flourish-y guitar interludes and Georgia's voice was very clear and sweet all night.

I think at first the band was a little disappointed that there were more song requests than questions, but eventually the crowd did warm up a bit. I was sorry I didn't come prepared with a barrage of questions myself. I managed to think of a few good ones but I'm not one to yell at a band in front of a room full of people, so I never got the nerve.

Other songs played included "Season of the Shark" (audience request), an album-quality "Mr. Tough," and a cover of Jackson Browne's "Somebody's Baby" (!!!) Their version was pretty feedback-heavy and loaded with bass, and I felt lucky to be able to hear it. If it were me up there, I'd be tempted to camp this song up, but they stayed pretty true to the original with only a little variance, a little psychedelia in the guitar parts and a little falsetto in the vocals. The whole band really threw themselves into the final chorus and added some fat guitar licks to it at the end. They finished with a scaled-down "Autumn Sweater" since someone had asked about it earlier. The song ended gently and there was a (mostly) standing ovation for the band as they exited the stage.

While this was a departure from the shows we normally see, I always enjoy whatever Yo La Tengo wants to dish out and this was no exception. It's nice to see a band do something different and offer something more personal to the fans.