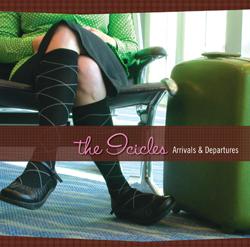 I've had this CD in my possession for ages but have been delayed in reviewing it. Perhaps that's due to a subconscious dedication to the adage "if you can't say something nice, don't say anything at all."

See, this record is so sugary it'll give you cavities. Plus, singer/main songwriter Gretchen DeVault has a voice that grates on me; full of saccharine, it's completely devoid of soul.

This album is remarkably adolescent. The lyrics sound straight out of my high school Literary Magazine submissions, and some of the songs sound like they were written for tweens as a sort of lesson: "This is me, I won't change it … keep your judgments to yourself," goes the final track, "Snappy." I can see the band dressed in matching outfits and performing this on a kids' show on PBS or some kind of modern-day After School Special about self esteem. As a matter of fact, the band has a series of publicity shots in which they're wearing matching pink outfits, and it looks like they tore a page straight out of the Wiggles' playbook. So I'm confused about who they intend to appeal to. "You don't know anything about me / you think everything is about you…" I think I wrote such profound lyrics in the 8th grade. As an adult, I'm almost offended.

Oh, the poor Icicles probably don't deserve my icy criticism. I mean, given the sweetness overload of the songs, I'm sure they're quite a nice bunch. There are high points on this album, such as the strangely out-of-place "Whirling," on which group harmonies effectively bulk up DeVault's empty vocals. "Gedge's Song" has a nice glockenspiel melody, and "Snowbird" seems more dimensional than many of the others. But as a whole, this album is just flat. If the band had made an album full of songs like "Whirling," I'd probably be able to listen to it without cringing. But as it is, this album's been on my desk awaiting review for so long because every time I started to listen, I couldn't stomach it and switched over to something else.