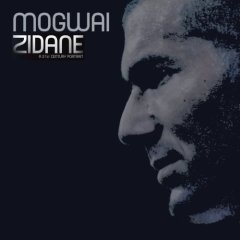 I’m not really sure who closely our loyal TIG readers follow the comings-and-goings of international soccer (“football” to the rest of you non-Americans). My guess is that the level of fanatic devotion to the sport is somewhere between zero and none. I could be wrong, but in terms of international soccer stars that the average American – heck, even a casual soccer fan – could only probably name guys like David Beckham, Ronaldinho, maybe Wayne Rooney, and possibly the former star of the French national team, Zinedine Zidane.

Now, I suppose I shouldn’t blame anyone for not keeping track of the Bundesliga or the British Premier League or the like, but you should at least have the same visceral reaction I had when presented with the idea that Mogwai was going to do the soundtrack to a movie about Zinedine Zidane. I mean, fast moving soccer player and Mogwai seem to go together like playing Tori Amos to soundtrack a film about Shaun Alexander. However, here we are, discussing music from a documentary about the French footballer with the famous temper written by a bunch of moody Scots who once recorded in the “Castle of Doom.”

It might not be a match made in heaven, but Zidane: A 21st Century Portrait is a fun exercise in musical conflict. Now, I suppose I should admit right off that I have yet to see this film. Should that matter when examining the music? Probably not, but it leaves me having trouble imagining how the music of Mogwai could mesh with a movie about soccer. Sure, most Americans think of soccer as a slow, boring sport, but well, they’re totally, utterly and magnificently wrong, so we find ourselves back at the beginning, trying to match soccer highlights with modern day dirges. And dirges they are. “Black Spider” starts like a modern rock band stuck in molasses, but then again, that is what we like about Mogwai – the slow, luxurious building of thick, textured melody. If that is what you are after, than Zidane is right up your alley. “Terrific Speech” and “Time and a Half” sound like a funeral marches for a returning (and dead) hero, bleak and melancholy, while “7:25” has a little more hope to it, sounding more like something you can recover from an injury to. Some of the album is definitely designed as backing music, tracks like “Wake Up and Go Berserk” or “Half Time” adding mood to a scene rather than existing as its own entirely. “Half Time” especially comes across almost like a Sigur Ros composition. Things, do get a little out of hand, though, on “Black Spider 2” that clocks in at over thirty minutes, which is overindulgent even for noise purveyors like Mogwai.

Maybe Mogwai has found its new niche – they’ve penned or helped penned music for two movies this year: Zidane: A 21st Century Portrait and Darren Aronofsky’s The Fountain. The Mogwai formula really doesn’t change that much between their studio recordings and these soundtrack sojourns, although you feel that they know they’re background fodder here. Zidane: A 21st Century Portrait doesn’t really offer us much new from the band, but its you’re a connoisseur of Mogwai, then you’ll enjoy it. Just don’t expect to hear it at the stadium.