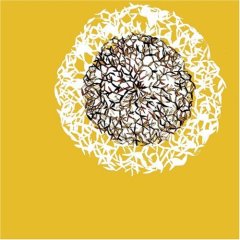 Up near the Strait of Juan de Fuca, about an hour ferry-ride from Anacortes, sits Orcas Island, the second-biggest in the San Juans. Orcas is shaped very much like a downward facing horseshoe, which could be termed unlucky, but if you flip a map over, then everything is okay. Along the western "leg" of the horseshoe there is a road which curves about ten feet above Massacre Bay, a blue pearl of ocean resting, tucked within walls of brown and gray stone, green pine trees, small cottages merged with forests.

Certain songs bring to memory this road, driving along it with the sun setting behind a mountain of pine trees as the water in the bay would become a deep indigo. I spent three summers on the island, and over those summers, certain songs and records came to be played over and over in the car, if for no reason but that there was no record store on the island. Sparklehorse's It's a Wonderful Life was all I had the summer of 2002, and Postal Service's Give Up typified the summer of 2003. Last summer I was on a Dylan kick, and every time I hear Johnny Cash and Bob do that duet on "Girl from the North Country," I am instantly transported back to that narrow bayside road.

It is nothing out of the ordinary for a sensory impulse, like hearing a certain record that always gets played in a certain environment, to trigger a memory of said environment. Pavlov's salivating dogs, for example, or every other experiment one has to learn about in intro to psych classes in college, explain this phenomenon. I remember it being the olfactory sense that had the strongest tie to memory, which is why the perfume/cologne industry does so well. I sat in the back of the auditorium, however, and was just taking the class to fulfill general education requirements. With a better effort, I might be able to remember more.

I apologize for all the exposition and ego-centeredness in the opening to this review — it's just that it was quite a surprise when the new record by Brooklyn-based Ida took me immediately to that road on Orcas Island. I had never ever heard the record before, nor had I ever listened to any other Ida records on that road. Why, then, should I think of this road I hadn't driven on in more than half a year?

Originally a trio formed in 1992, Ida has released numerous records over the past thirteen years of their existence, starting with the cassette, "Songs from the Ranch," released independently in their native Brooklyn.

In February of this year, however, their most recent effort, Heart Like a River, was released on Polyvinyl Records. Two of the founding members, Liz Mitchell (guitar, harmonium, vocals) and Daniel Littleton (guitar, vocals) have since added Jean Cook (violin), Ruth Keating (Drums), and Karla Schickele (bass, piano, vocals) to the line-up, and the results are a beautiful record incapable of harshness or sharp edges, but rather capable only of a sound full of harmony, delicacy and sincerity.

Heart Like a River kicks off with the song "Laurel Blues." A harmonium begins, providing the soft canvas for acoustic guitar and three-part harmonies. While it doesn't necessarily conjure direct comparisons to the music of Sparklehorse, Postal Service or Dylan and Cash, it has a similar emotion, a similar feeling to it — that same, semi-melancholic contentedness found in listening to "Girl from the North Country" is present. "Laurel Blues" is an invitation, an outstretched hand one wants to not only hold, but to understand.

Many records are easy to fall in love with, but it is a rare occasion when a record will send intimations that the music may be in love with you. The third track on the album, which follows the simultaneously breaking and comforting "599," is "Late Blues." Listening to "Late Blues," I did not feel as though I were falling in love, rather I felt as though I were loved.

Daniel Littleton and Liz Mitchell begin the song to the accompaniment of a plucked electric guitar and brushed snare drum. Their voices harmonize on the opening verse: "If I get lost along the way to meet you/ If I'm more than a little late/ If I get caught up in circles, chasing my own tale/ If I trip up and fail you/ If I let you down, if I let you down."

The only song to which "Late Blues" draws comparison is Jeff Buckley's "Everybody Here Wants You." Sexy and comforting, sentimental without being melodramatic, it is easily one of the most beautiful songs of the year.

But let me not mislead you into thinking that the record is made up entirely of "songs" and does not exist well as a complete record. The tracks lead into one another in a logical progression achieved rarely, if at all, without a maturity a band like Ida achieves only after having played and lived together for so long. Put simply, Ida knows how to write, record and produce a record the way they want it done. Heart Like a River comes across as confident in its craft, and honed in its ability to affect the listener.

Emotion is a funny thing. More often than not, a person has emotions towards something. ("I hate Morissey's new record," "I love the Smiths," "I hate that I don't own Nirvana's box set," "I love that I own every New Order album on vinyl," etc.) Rarely are there moments where one feels affected by something or someone before they feel for something or someone. Listening to Heart Like a River, I feel appreciated, comforted. For that, I appreciate this record. While by no stretch of the imagination is "Heart Like a River" on the same level of ingenuity as The Beatles' Sgt. Peppers or The Clash's Sandinista!, but it is, put quite simply, a very good record. It reminds me of the ocean, of the island, of the certain color of blue only a sunset over trees can induce in the ocean.