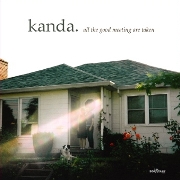 All The Good Meetings Are Taken

Portland duo Kanda delivers catchy and pop-hooked synth-rock that moves from cute and sly to rocking and smooth on their second release, All The Good Meetings Are Taken. Throughout the release, Akina Kawauchi and Arland Nicewander sing playful vocal harmonies toward one another, their melodies sounding like musical embraces.

Most of Kanda's songs are short, hitting around the two minute mark, and the brevity only accentuates the band's puckish charms. The lyrics move from melancholic to uplifting, and the gentle electronic beats keep a buoyancy throughout.

Similar at times to bands like Busy Signals (the second song, "They’ll Need Cocaine," has a similar lo-fi electronic flavor running through it), Kanda definitely has a nice New Wave vibe going on — though their approach is much softer than other bands who've been mining that decade. There are also sounds that call into the future, like Atari game dance songs for the kids of tomorrow. I'd place Kanda on the musical spectrum somewhere between the Postal Service, the Pulsars, and Barcelona, with some hints of an Altered Images groove dropping between the beats, and a Land of the Loops kind of humor. And really… that's not a bad place to be….