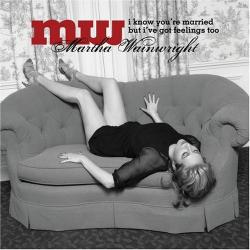 I Know You're Married But I've Got Feelings Too

Pretty little Martha Wainwright, sister of so-and-so and daughter of yadda-yadda, is back with her second full-length, the cheekily titled I Know You're Married But I've Got Feelings Too (a lyric from the album's opener "Bleeding All Over You"). The album is deeper and darker in tone than its predecessor, slowing the overall pace and seeing her develop as a composer, for better or for worse. She's still got her way with words, though, as well as one of the strongest, sexiest voices around.

Since we last saw Martha, she married producer Brad Albetta, a producer on this album as well as her previous self-titled effort. She also scored a hit overseas with a Snow Patrol track that she lent vocals to ("Set the Fire to the Third Bar"), and appeared in Martin Scorcese's The Aviator. Seems she's made other friends too; this guy Pete Townsend plays guitar on a couple of tracks on I Know You're Married…, and this other dude, Donald Fagen, lends a hand on synths.

The album is moody, with more emphasis on emotionally-charged ballads than upbeat numbers. It's heavy on dramatics (she is you-know-who's sister, after all), and her style takes root in classic female folk-rock, like something Carole King or Carly Simon may have spun in their day — which isn't a terrible thing. But having followed and adored Wainwright since her backup vocals on her brother's debut first caught my ear, I feel like something isn't quite right here.

That said, it's still a gorgeous listen. Martha is stunning in every way — for goodness sakes, look at that cover photo. Girl's got pipes that dreams are made of, and when they're on full display they have a hypnotic effect. Songs like "In the Middle Of the Night" (no, not a Billy Joel cover, thankfully) see her voice soaring and gliding, peaking and valleying with such perfection that you can't help but find appeal in it even if you don't particularly like the music.

She seems to be following her brother's lead with orchestration, evidenced heavily on songs like "Tower Song." She's not just writing words and music; she's composing and designing intricate arrangements. Every song is so filling, it's like trying to consume a whole bar of the richest darkest chocolate. If you eat it all at once, you lose track of the delicate flavors. Maybe this album is best experienced in small doses, piece by piece.

The pieces I'm most drawn to include "Comin' Tonight" and "You Cheated Me," two of the less swollen numbers on the album (and coincidentally also the two that feature Townsend). They are lighter, a bit more up-tempo, and have more simple melodies that you can get caught up in.

Overall, though, I feel like there's just too much of the richness and not enough to cleanse the palate in between. These are heavy, heavy songs. I hold Martha in the same high regard as another of my favorite modern female singer/songwriters, Nicole Atkins. Atkins managed to strike the balance that's missing here with her debut, Neptune City. Notice how a brooding song like "The Way It Is," nestled among less goosebumpifying (but still fantastic) songs like "Love Surreal" and "Maybe Tonight," really knocks you out? Wainwright tries to present an album full of "The Way It Ises" without striking that balance (not to mention that in the context of this particular example, not one of Wainwright's songs is actually as phenomenally strong as "The Way It Is"). It's almost as if Wainwright set out to prove herself as a singer and composer when she didn't really need to — we already knew she could do it.

Perhaps my greatest disappointment with this album is that it seems to be going in a direction away from the sorts of songs that I most adored on her first album. The only song that gives me the same kind of glee as "When the Day Is Short," for example, is the album's closer, her cover of the Eurythmics' "Love Is A Stranger" — a fantastic cover, but a cover nonetheless. It also feels terribly out of place here, following a suite of dark and dramatic songs with a peppy, bright number. It's the second of two covers, the other being Pink Floyd's "See Emily Play," which fits more fluidly with the rest of the tone. And there's certainly nothing here that'll stop you in your tracks like "Bloody Mother Fucking Asshole."

You can stream the entire album at Wainwright's website, and as of press time, downloads of a few songs were available here.