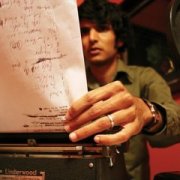 In the press release for his self-titled album, Imaad Wasif writes, "Can you hear the soft blows of my record?" I don't know if he was trying to be cute or funny but he really hit the nail on the head with that comment.

Imaad Wasif is the Chris Carraba/Dashboard Confessional for the mature, (post-) collegiate crowd. The acoustic guitar and ambient electric guitar put you in a quiet and introspective space. The music is dark and the lyrics even darker; take these lines from "Without" for example: "Spent my weekend in a hole/for the atmosphere/I thought I'd do some good/bring someone else to tears." It's no wonder that he was inspired by Sylvia Plath while he wrote this album. And like most singer-songwriters, Wasif doesn't try to hide much from us. His real strength is that ability and willingness to write honestly, no matter how somber and gloomy the result.

The fragile opening track, "Spark," is the best one and would fit perfectly in a movie in the driving-home-after-the-breakup scene. In fact, it would fit perfectly in the real life scenario as well. The chorus is the most memorable part, where Wasif sings, "The dark's all I've got/and it never let me down" and the final line, "I'm trying to forgive you for what you've done" will stay with you long after the song's 2 minutes and 39 seconds are through.

The only downside to Isolation is that there is no high point. Wasif keeps himself low throughout the entire album and doesn't offer any signs of hope, which makes it a little hard to get through the whole thing in one long listen. You can really appreciate this album better if you listen to it out of order and pick a song according to your mood. And it's clear that Wasif intended these songs to be a sort of catharsis when he wrote them.

Listen to it closely when you're having one of those days and you'll feel like someone else has been there too. After all, with song titles like "Isolation" and "Out In The Black," there's really no room to feel any different, is there? But this is the perfect soundtrack for a long night spent in isolation (sorry, I couldn't help myself), or what Wasif himself calls, "The late night vibe or the early morning fear." I couldn't have put it better myself.