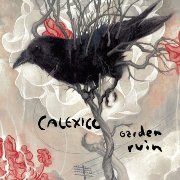 Calexico is a tough act to define. On one hand, these seem to be in the hard Alt-country clan such as the Old 97's or Wilco. On the other hand, they throw enough Latin rhythms into their songs that you could get away with calling them the indie rock equivalent of the Gypsy Kings. You can sit down to a given Calexico album and wonder if you've wandered into a folk music festival and then suddenly find yourself on the hot and sweaty streets of the town that gave the band its name. Garden Ruin seems to list heavily towards the aforementioned alt-country posse much more than their previous albums, and in that regard, Calexico seems to lose a bit of the charm that set them apart from their musical brethren.

The last two outings by Calexico, last year's brilliant collaboration with Iron & Wine, In the Reins and 2004's Convict Pool, were unique in their own rights, creating a dusty western atmosphere and cross-cultural musical pastiche. Whether intentional or not, Garden Ruin tones a lot of this experimentation down; instead Calexico opt for a more straight-forward rock and country sound that at first listen is disappointing. Gone are the Mexican guitars and horns that made Convict Pool such a treat. Instead, on tracks like the opener "Cruel," Calexico morphs into an indie rock version of the Eagles or James Taylor, with a quaint folksy feel that is pleasant enough. This continues into "Yours & Mine," where the quiet guitar strumming and hushed vocals are straight-down-the-barrel folk rock akin to Mark Erelli's Compass & Companion. Nothing can really grab your attention and keep in the early goings, or, even worse, you begin to feel uncomfortable that the Tucson boys have been listening to too much Don McLean or Rhett Miller for their own good. "Letter to Bowie Knife" might be their most obvious snatch at stardom with a feel-good hummer that rocks in the appropriate places and rolls in the appropriate places but lacks any clear personality.

However, all is not lost. "Roka" is a beautiful song that returns to the Latin roots of early Calexico. The song is rich with musical textures that weave an apprehensive mood that dances between Joey Burns' and guest Amparo Sanchez's intertwined vocals. "Nom De Plume" has a gypsy feel that creeps along seductively; the vocals are barely whispered over the guitar and accordion, creating an oddly Leonard Cohen or Tom Waits mood. "All Systems Red" might be the best attempt at changing Calexico's sound to a more straight-up rock and roll. The guitars wail and the drums crash, and it almost feels like this might be a misplaced U2 song as Burns sings, "I want to tear it all down/and build up it up again."

Sadly, the misses are much more prominent than the hits on Garden Ruin. Whether the newfound notoriety Calexico garnered from In the Reins has translated into a desire to "make it big," or this is just a natural attempt at something different, the band has lost some of the hallmarks that made them one of the rogue children of indie rock. At best, Garden Ruin can be seen as a stepping-stone or slight excursion for the band, at worst it could be the beginning of the naturalization of Calexico. Maybe the band was worried about becoming a one-trick pony in their Mexi-indie-rock sound — kind of like a musical version of immigration control (you know, too much Mexican influence!)

Garden Ruin just seems to leave you feeling like you went down to your favorite tacqueria only to have it replaced by a Subway.