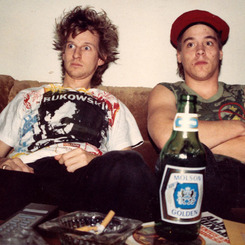 The Northwest Film Forum is screening Shut Up, Little Man! An Audio Misadventure, all week (9pm tonight, 7pm Tues, Weds, and Thurs). This documentary about the power of viral media rocked everyone's socks off at SIFF this year — and hey kids, you too can learn how much power a casette tape wielded in the pre-internet world of 1987 (what). See, these two SF guys decided to record the drunken ramblings of their next-door neighbors — a raging homophobe and his flamboyantly gay roommate — (what. what.) and play them for people….who copied them and passed them on to other people, and so on, and so on, and so on. $6 for NWFF Members, $6.50 for seniors/students/kids, $9 for everyone else

The Varsity has Detective Dee and the Mystery of the Phantom Flame on tap this week — a CGI-enhanced adventure flick from action master Tsui Hark, starring the amazing Andy Lau as a detective released from prison by the evil empress who put him there in order to stop her assasination…or something. It involves bodies spontaneously combusting, body morphing, an ass-kicking chick with a whip – and IIRC, a troll. No surprise – I totally loved it when it played the film festival (also SIFF) earlier this year.  7:10 and 9:40pm, $10.50 general ($7 Tuesday special), $8 seniors/kids, $8.50 students

I love me some Jane Austen, and over at Central Cinema, there's a Sense & Sensibility Pajama Party on Wednesday, 9/28! I bristle a little bit at the "girls only chick flick" label they've stuck on it, but okay, I can roll like that. Anyway, if you've never seen it, Emma Thompson and Kate Winslet play the Dashwood sisters; one silly and romantic, the other restrained and serious. Enter charming young Hugh Grant as Edward (he seriously was charming once, you guys) and compassionate, yet bitter, Alan Rickman as grizzled old Col. Brandon. Hopes are dashed, hearts are broken, scandal is ensured. It's Austen, duh. And honestly, this Ang Lee-directed adaptation is one of my faves, simply because Thompson and Winslet act the crap outta it. TRY not to cry, I dare you. 7pm, $8 advance, $10 day of.