Imaginary Interview: The Fresh and Onlys 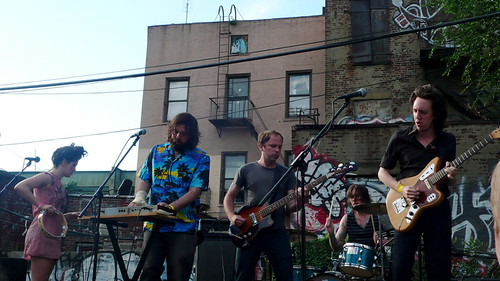 During the Scion Garage Festival in Portland over this weekend I caught up with front man Tim Cohen and Guitarist Wymond Miles of San Francisco’s Fresh and Onlys to chat about their prolific output (they started playing together in 2008 and have two albums, two 7 inch releases and two limited release cassettes released already, with another album to come out early next year), Tim Cohen’s solo project, and what makes their combination of Calvin Johnson-esque vocals and 60’s-infused riffs so dynamic.

TIG: You guys have been putting out a lot of music; two full-length albums this year, most recently Grey-Eyed Girls, and you just formed in 2008. You’ve released all your music on different labels, is there any reason for that?

Tim Cohen: For me it’s like there’s no reason not to. All these releases are so ephemeral and basically started out with Kelley Stoltz offering to put out our 7 inch. He was starting a label and we thought that was perfect since we really respect and admire his music and it was a great opportunity to have our first release to be a 7inch on his label. The next thing we put out was our full-length on Jon Dwyer’s label. Both those labels are so small and have a really limited release schedule. It was sort of coincidence the way those first two happened. The Seattle Dirty Knobby 7 inch was our third release and all those labels are sort of picky. I wouldn’t call them real labels. They didn’t really have a plan, they were just new, fledgling labels and they wanted us to be a part of it and we were excited to.

Wymond Miles: I think we’re working with a different model than the usual standard of what bands are supposed to do to release things. So how we write and record and the amount of material we have, having access to these different labels has really been a blessing for us. I think we’ve been really excited that people have been excited enough about our band and wanting to release things. We’ve been on a real creative high so we have the material to release.

TIG: Do you think you’ll settle down? Try to find a label to work with on a continuing basis?

WM: We’re sort of taking things a release at a time and taking the offers we get, but things are already scaling back for us.

TC: As we develop this band I think it may get more streamlined in terms of the labels we choose to work with. We’ve had progressively better opportunities with each label. All of our releases so far have been limited releases. I don’t necessarily stand behind that but I don’t oppose it either. It’s like, we’ve sold out of all our stuff and it’s not available anymore. It’s cool, it can be like that, but right now we’ve decided to reissue our first, self-titled, record because we’ve had people requesting it while we tour. We all think it’s a good record so we want it to stay in print. We don’t want it to be hard to get.

TIG: And you have put out so much music already. Do you guys just sit around and record songs all day?

TC: Basically, yeah. It’s a quantity over quality philosophy that I’ve embraced and I’ve kind of convinced Shayde, our bassist, and I’m trying to convince everyone else. Whenever you have an idea, just record it. Cause we have the means to do it. We’ve recorded everything so far in my bedroom. Because we can get it on tape, it’s like why not? We can swift through it later and whatever songs take wings, as Shayde says, they become part of a set or a release. We have hundreds of recorded songs that will probably never see the light of day just because we all espouse the philosophy that if you have an idea just get it down. Don’t be to precious or delicate with it, just record it, demo it, let it sit for a couple months, then listen back later and try to get a melody or vocal ideas.

WM: It’s unusual to have so many ideas indulged. It’s not just that we record all the time. It’s that there’s this support system both creatively and in how we record things. It’s kind of rare.

TC: What’s great is that we all constantly get ideas from songs in our heads and we’re always sharing them with each other and we amend them on the spot. It’s almost a game, having a creative wellspring in the band where no one ever dismisses or denies anything. Because we’re all creative people and we don’t have anything else to think about. Well he does (Wymond), he has a kid. But Shayde and I don’t.

TIG: Tim, you also have a solo project as well, right?

TC: Yeah, I have almost too much creative energy. I don’t know how to describe it. I think that what helps me be so prolific is that I’m open to having ideas flow through me and not think about them, but just express them. But this is our first priority. I mean we’re all in other bands and get involved in other projects but I’d drop anything to tour with this band. It’s the most symbiotic of all.

TIG: What would you, Tim, say makes Fresh and Onlys distinct from what your solo songs are like?

TC: I only have one record out, it’s pretty poppy but it’s mellower and I don’t think it would be fun to play live. It’s getting harder and harder to define what the Fresh and Onlys is. Some of the tunes we played tonight are brand new songs. Like “Summer of Love,” the slow dance song. Back in the day, I would have felt like that song was a Tim Cohen song but, number one, I didn’t write that song. I wrote the lyrics, but that’s it. The Fresh and Onlys is a little more all-inclusive because we don’t want to be pigeonholed. We’re not a garage band. The best description I’ve heard used for us is acid-pop. That could be pretty much anything. It’s just a feeling you get after playing a song, I’ll begrudgingly play a song and say, ‘I don’t know if this is a Fresh and Onlys tune,’ as a disclaimer. Most of the time Shayde has a strong opinion and a lot of the time you can tell. My solo project is basically songs I take that don’t sound like Fresh and Only tunes. I can tell when I present it to the other dudes and they’re like, ‘it doesn’t sound like we should play that.’ There are exceptions obviously, but I’ll take some of them and want to keep working on them.

WM: Because we record once the idea shows up, certain things just take. As you start to come up with ideas for a song you can see what its destiny is going to be. It’s like a cutting away to reveal the song.

TIG: What about No-Foot Boogie cassettes. Is that something you guys are using only for Fresh and Onlys releases?

Tim: Yeah. So far. We’ve put two cassettes out. It’s cool to have a cassette that’s sort of limited. I hate to be boutiquey about it or whatever. The first cassette was a lot of the original demos that started this band and I recorded some of those by myself, some with others. There were only ten of those. The second release, I can’t remember what we called it, but it has a bunch of songs that we recorded on four-track when our tape machine, our eight-track broke down. We went to four-track and we had a bunch of weeks when we were just really creative and some of those tunes are actually going to comprise the body of our next album, out on In The Red next year.     But they’re just demo versions. We made about 100 of those and they’re gone now. It’s just fun to have sort of limited stuff and, again, I hate to sound like a boutique label but it’s kind of a cool feeling to have people seek out the home demos that you’ve done on your own time.

TIG: Do you think you’d ever use No-Foot Boogie to release any other bands, friends’ projects?

TC: There was this band called Gardens that we played with in Detroit and Toronto and they immediately became my favorite band. There are a few bands in San Francisco that I really love. I would totally put any of their stuff out. But logistically thinking, I dubbed all those tapes myself and it’s really time consuming. It’s nice to have those tapes to mail order or on tour for some extra money, but it’s a lot of time. I would have trouble. Like the dudes at Woodsist, the label that put our last record, I’m amazed at how much energy and time he has to run his own label, run a band, do artwork. I find myself, most of the time wanting to do creative stuff, but when I’m not, I’m just going to relax and live life.

WM: You don’t want to see him when he’s not writing a song. He’s a different creature.

TIG: With two records out in 2009, did you record a lot initially or has it been ongoing?

Tim: Ongoing. We basically recorded our first record and then went back and rerecorded it with a full band. We gave it to Castle Face and they were like, ‘OK, let’s put it out.’ But we were like, ‘no we can do better than that.’ We did the brunt of it live and then we took two or three of the original recordings from the previous session and put those on there too: “Endless Love,” “Nuclear Disaster,” “Imaginary Friends,” and “Only One I want.” Basically what became Grey-Eyed Girls was just a month of recording after that. We weren’t really conscious that we were making an album, but it was a certain time when all those songs came together. We made a bunch of other songs at that time as well. This next record, on the other hand, we have completely recorded demos and have ideas for sequences. This is the best idea we’ve had of what we doing in terms of a record.