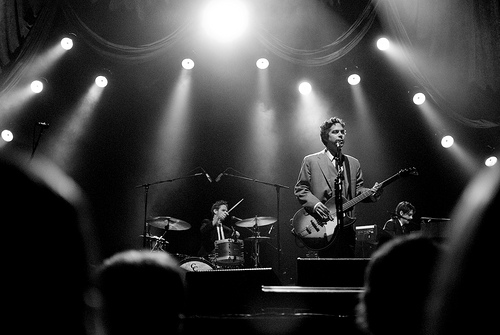 Monsters of Folk: not just another bunch of dudes with beards.

If this is what the kids are calling folk these days, I’ll take it.

It’s been a little bit of a rough go for me, as it has with many people, to get past the band name “Monsters of Folk.” Really. Partially because it’s just bonkers, and partially because the “folk” part conjures up old James Taylor reels and campfire sing-a-longs. And beards. But the roster has been the trump card thus far, boasting members of Bright Eyes, My Morning Jacket, and the gorgeous, prolific stylings of M. Ward himself. Take him, Conor Oberst, Jim James, and Mike Mogis, add two parts swooping red velvet curtains and one part spectacular sound system, stir, and you’ve got a band that’s so good — well, they could call themselves “Banana Eating Spaceships” for all anyone cares. This particular combination of frontmen from a cross-section of such notable indie bands does indeed a blissful sound make, strangely named or not.

To take it a step further, these guys pack a live performance that will blow you right out of your seat. No mild, hokey row of stools; no singing in the round, no speeches about human rights and no Joni Mitchell covers. Save for some slowed-down plugged-in acoustic numbers, this was a full frontal rock show, trading off collaborative songs, hits and B-sides of each other’s repertoires with skill and ease. Jim James let his vocals ring out across the seats of the Paramount, bathing us in echo and bouncing off the ceiling and the walls. Conor Oberst’s quivery, earnest, from-the-gut lyrics (and their delivery) translated perfectly from the stage, both on solo and accompanied songs. And M. Ward — well, M. Ward is just unreal. He’s definitely a favorite of mine and for sure the catalyst that got me to the show. He ranges from bellow to whisper, single-string strum to full ecstatic chord stylings and back, painting pictures and conducting symphonies that fill up the whole room and snap back to silence — all in the space of about a minute and a half. It was definitely a sight to see (and hear).

All in all, the show was painfully stellar and the Paramount was the perfect venue to showcase the total bliss that ensued. And we’ve got the photos to prove it: