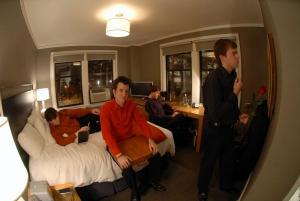 Over the past few years, Hotels have emerged as one of the most enjoyable bands in Seattle. They have a synth-heavy sound recalling artists such as New Order, Joy Division and OMD; their excellent second album, Where Hearts Go Broke, would not sound out of place if it were released by Factory Records circa 1981.

I’ve known a few members of Hotels casually for a couple of years and it is a pleasure to watch their live show and recorded music improve and grow more confident while finding their own sound and take on their inspirations. They’ve played several important shows this year, including the Capitol Hill Block Party and playing at the Crocodile just a few nights after its big reopening. They’ll also be playing Bumbershoot this year on Saturday, September 5 (at 2:00pm in the EMP Sky Church).

I e-mailed several questions to Hotels bassist/singer Blake Madden about the band’s growth, playing Bumbershoot and what to expect from Hotels in the future.

When we first met a few years ago, Hotels was a bi-coastal band, with members in New York and Seattle. Is that still the case or is this primarily a Seattle band now?

We are primarily in Seattle now. Rich Bennett, our original New York guitarist still works with us on occasion, and even played keyboards for us during a short tour out here a year or so ago. However, Rich Spitzer, our original synth player is moving permanently to Japan. With this economy, plane fare to New York was hard enough to come by, let alone Japan. Long distance relationships never work out anyway.

Hotels have really been doing great as a band, getting a lot of high-profile shows (CHBP, Bumbershoot, headlining one of the first local shows at the Crocodile after their reopening, etc…), what has the band done differently with this album than with the previous one?

We put subliminal messages at subsonic frequencies in all the even numbered songs on the album that just say “love us” over and over again. But seriously, I think we’ve just matured and worked a lot harder in a lot of different areas. This album is better than Thank You For Choosing…. Our band chemistry is probably the best it’s ever been. We practice harder and more often than we used to. Our live performances have gotten better. We’ve upgraded our gear over time. And all this has been because of deliberate and concerted efforts on our part to get better. I’d also be lying if I said we weren’t helped in part by being in a smaller market now (Seattle, as opposed to New York) and being more involved in our local music community in general. It seems like people are much hungrier for new music out here. I lived in New York for five years and never had anyone say to me “I’m going to a show tonight. I don’t know any of the bands, but I’m just curious as to what they sound like…”

How does the band write songs?

I write most of the material and then bring it in and we “massage” it into shape and work out sounds together. It’s funny because I feel like we have an extra step that a lot of bands don’t have; even when the song is fully written, it’s only half-done, because we still have to go through and painstakingly work out which sounds will be used to best get the song across. Do we want an epic string sound here, or a short snappy synth? More reverb and delay on the guitar or less (almost always more)? Effects play such a huge role in our sound; most of the songs would not sound that great without ’em. That’s mainly by design, though. Technology has made so much possible sound-wise that we’re not that interested in making music to be played by a dry bass, drums, and guitar trio- there are a million singer-songwriters across America who are doing that every night. We like to get spacey and intangible with our sound, so that even if you know what everyone is playing, there’s still an element of mystery to the final sound.

Which artists were influential on you when you were growing up and learning to play instruments?

Of course, I love Peter Hook’s bass playing in Joy Division. I bought a Rickenbacker bass to try and get his sound, only to find out years later that he didn’t actually play a Rick, just a cheap copy. I was also way into the Dead Kennedys and Klaus Fluoride was one of my favorite bass players. Both he and Hooky taught me that bass does not have to be simple and boring, with guitar players constantly whispering in your ear “hey man, just play the root note.” They informed my personal philosophy of “bass liberation”; the bass can (and must) be as important as any other instrument in the band.

What about your set at Bumbershoot are you most looking forward to?

I think we are all amped to play the EMP Sky Church. If I could dream up a venue that would fit our aesthetic and preference perfectly, it would be that.

What are the bands’ plans for after Bumbershoot?

We’ll be taking a short trip down the West coast to play some shows in October, and then we’ll mostly be recording our new album On The Casino Floor, a spy epic that takes place in a casino in outer space. We’re trying to get it out by the end of this year.

If you could play a show with any band (active or not), who would it be? Why?

That’s a tough one. It’d have to be someone we sound good with. Maybe, [it would be] either DEVO or Yellow Magic Orchestra. In either case, it would be a synth- bloodbath.

I really thought Where Hearts Go Broke was a lot more accessible than Thank You For Choosing… (The hooks are a lot more prominent, for example – which is almost certainly why I liked it more). Do you agree?

I do. Thank You For Choosing… is all over the place, a lot of times in the same song. I don’t regret that, and some of the more schizophrenic songs are my favorites, but I also understand that it was difficult for some other people to latch onto. It was our first album, and the first time I was writing music as the primary creative force in a band, so I felt I had to squeeze everything into every song, just in case I woke up the next morning and had to start all over again. “Atlantic” is the song on that album that people seem to like the most, and I guess it shouldn’t be a surprise that that was the one that was the easiest and most natural to write. With Hearts, I wasn’t trying to rewrite “Atlantic” ten times, but I was trying to stick to that lesson of letting things come more naturally instead of jamming as much stuff into a song as possible.

Also, the night before we went into the studio to record Hearts I had a dream. I was on stage with David Bowie in front of thousands of people. He was singing with a mic and I was wondering what the hell I was doing there. He turned to me, pointed at me, smiled and said in that thick British accent: “Your stuff’s great. You’ve gotta get it out there.” I said: “Thanks, David Bowie,” and then I woke up. It felt like a good omen. If the imaginary David Bowie in my dream dug it, surely the rest of the world couldn’t be that far behind.

Do you have any favorite Bumbershoot memories?

A few years ago, Brendan (Malec; Hotels’ guitarist) and I randomly lucked into some free tickets at the last minute, so it was cool to go without any expectations or pressure to see certain bands so that we could feel we got our money’s worth. We saw Deerhoof, who I love, and they were awesome. On a whim, we decided to check out something at the Sky Church called “Synth Club”, just because of the name and because Reggie Watts was in it. It was the best thing we saw all weekend; basically a four man synth dance jam, with Reggie doing all his crazy vocal stuff on top of it. The whole place was dancing and it was a blast.

Was there any event or show that triggered your wanting to become a musician? Was bass your first instrument?

Honestly, I only got a guitar in junior high because all my other friends had one. I didn’t take music very seriously until a few years later. And I was a shitty guitar player. I got into a band with some friends and the bass player and I switched instruments one day just for kicks. We both instantly liked our new instruments better. I found that if I played the same stuff on bass that sounded crappy on guitar, it was much more interesting and enjoyable.

What is coming up for Hotels in the near and distant future?

Expanding our stage show to include more theatrical elements. Adding a string section to some live performances. A Hotels puppet show. Doing movie soundtracks. A show of all our favorite covers. Conquering Europe. We like to have our fingers in a lot of pies.