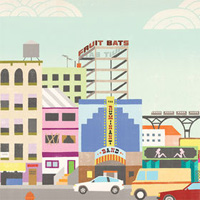 It’s hard not to cheer for Eric D. Johnson. Recent collaborating with The Shins and Vetiver just proved what good taste us early-Aughts fans of the Fruit Bats’ debut Echolocation (2001) had. Our initial enthusiasm had been proved right by Sub Pop releases Mouthfuls (2003) and Spelled in Bones (2005), yet larger reception eluded the Chicago multi-instrumentalist who started in the band Rowboat. In the past few years, echoes of his hayride, clap-infectious, intelligent songs have streamed like fresh water through the body of wide-spread rock-pool, even to the point we may have forgotten about the Fruit Bats. Their music seems like just another shimmer on that great music surface. But their use of major keys, lack of drama or urgency or melancholy, seems like a world other kind of band sometimes, a “ruminant band.”

The new album The Ruminant Band is Johnson’s most assured work, a tight novelette with girls being taken to see Three Dog Night at the fair (“Singing Joy To The World”), odes to a “Feather Bed,” broken down TVs, Rains of May pouring like the Genesis flood (“Flamingo”), poison frogs, doves, and dogs. This is a record both ample and snug, close and incandescent. “Do what thou wilt, do as you please” is its message (“The Blessed Breeze”), touching on our primitive but timeless needs for romance, community, and chooglin’.

A round of applause should be given drummer Graeme Gibson, for not just driving the gently shaggy tunes along without the dour excess of certain other rhythm-fixed contemporaries, but also produced “The Ruminant Band” to be as pleasurably considered as the album title suggests. “The Hobo Girl” goes in its natural direction, falling into the chaos of a party laughing and missing the beats in their singing along. “Feather Bed” features the kind of piano John Cale would have played on the third Velvet Underground album if he’d been allowed to stay in the band — joyfully driving it along like a Chuck Berry of the 88s. The Van Dyke Parks-style parlor pop of closer “Flamingo” could be a Neil Young song, and the Wurlitzer swirling beneath sounds like caramel on the melting ice cream cone.

I don’t know if Johnson and Gibson and his other players can pull off something this elegant live, but we have a chance to see it this week, and I’ll bet with all his experience on the road and carefully romancing his muse will have a pay-off with in-person performance.