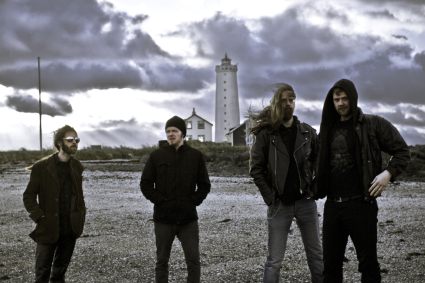 What happens when a black-metal kid grows up and expands his musical horizons? If he’s Birgir Thorgeirsson, you get Kontinuum. Recorded at Sigur Rós’ Sundlaugin Studio, Kontinuum’s genre-bending debut Earth Blood Magic draws from influences as varied as neo-folk and industrial. Somehow these sounds that shouldn’t go together all melt into a dark, intense, atmospheric beast that just might rip your face off. I met Birgir in a Reykjavík coffee shop, where we talked about his new band and dished on some of Iceland’s biggest musical exports.

BT: Yeah, that’s a really short story because we are so recent. I moved back to Iceland in 2010 and I didn’t have a working band. I had been working on ideas and searching for something; like a frustrating search for a voice. I kind of felt that I found something I believed in; because you really have to believe in it to dedicate everything to it and for it to be something you’re proud of. Then I just called up my drummer and we started on the album right away.

TIG: So where were you before?

BT: We were in a band called Potentiam which was a kind of underground, black metal band. It was one of the first bands in Iceland to release albums internationally – well in this genre – and all the other members had other bands. We have a long list of bands that we used to be in.

TIG: Are you all just focused on this project now?

BT: I think drummers are excluded from the question because there are always too few drummers. Our drummer’s in another project, but I think we are all quite focused on this now. You know, it was quite a good start. We got signed with a label that’s quite known and so we have an opportunity to do something.

BT: You could say that, because it’s a new name. But you know, as individuals [we] haven’t been the most productive people on earth. We should have been doing this in 2004. But I think with this one, it came just like when you are a lot, lot younger; when you’re somewhat obsessed by it. It’s kind of hard to explain. You just have that overwhelming feeling that you have to do it. We didn’t really expect anyone to like it, actually. That’s the funny thing. It’s kind of a diverse thing. But I never really imagined that people would like it and we’d get signed and get all this…we’ve had a fair amount of attention already, so maybe there are more people like us out there.

TIG: A lot of cross-genre bands sound jumbled up, or else it’s like, “Here’s the metal song and here’s the indie song,” but Earth Blood Magic is very cohesive.

BT: I don’t know how to explain that. Someone asked me this before. It’s not that conscious. It’s not a clinical process. You just end up with a mix of a lot of things in your head, and stuff you want to say, and mixed with your own style it comes out. I just can’t really explain how.

TIG: It’s a long way from black metal – what are your inspirations these days?

BT: I don’t like all the black metal I listened to when I was howling at the moon when I was 16 years old, but I still like a lot of them. But over the years… you know as a kid, and being part of a particular genre, you’re kind of shy of saying, “Oh yeah, I really like Elton John but I’m not gonna admit it.” But when you get older you get the confidence to just like what you like. If you don’t do that, you just end up not appreciating music anymore. So lately I’m always looking for something that surprises me. I really like the whole kind of neo-folk stuff, I really like a lot of indie stuff, and Icelandic bands. I discovered one on KEXP; Mr. Silla is a great Icelandic band. Yeah, I could probably mention a band from all genres. I think it’s important to listen to a wide range of stuff, because everyone’s dealing with the same thing. They’re trying to say something and not be repeating history.

TIG: How does your sound fit with the small community here?

BT: I think, you know, we have a metal background, right, and we’re signed with a metal label. But I really always prefer when we have an idea, that it makes the metal Puritans question themselves, “Is this something I should be listening to?” I think the album is kind of successful at this. You might really want to do a song in a particular way, but might shy away from it because chances are, your fan base won’t like it. Equally, like if an indie person would like a song, I would also like them to give the metal track a chance. Because myself, I can enjoy both worlds. I think more people should.

When we were working on the album I thought there was no chance – no one would like it – I was very pessimistic. But now after hearing from people who do like it, I see a lot of websites and forums with people who have diverse tastes. I read the other day that Thurston Moore of Sonic Youth is joining Twilight, a black metal band. Candlelight [a metal label] signed Cold in Berlin. They’re kind of indie, art school kids; that’s my impression of them. Even though I don’t like all their songs, I like people that take risks and challenge [expectations].

TIG: But you are not playing stages with folk bands?

BT: Yeah, I think we won’t be touring with Of Monsters and Men.

TIG: You have gotten a good response for the album?

BT: Yeah, I was actually quite surprised. We basically just had good reviews and some were really, really good. I think this probably is a typical kind of album that reviewers like. Because if you are a reviewer, you hear a lot of the same. Maybe if you get an album that surprises you, that’s maybe a good reviewer-type album. But I think there’s also just normal people that like it. I mean, yeah, we have a lot of work to do, because it’s just our first album. But we’re really pleased with the reactions. We couldn’t have asked for more, really.

TIG: What would you like to do differently on the next?

BT: We’re working on doing an EP. That’s going to be kind of a conceptual thing.

TIG: Can you talk about the concept?

BT: It has the working title Strange Days. The concept is just those days that everything seems, you know, different. I don’t know how it’s gonna end up. We have a lot of songs, we just have to choose, but it might even be more indie and less metal. 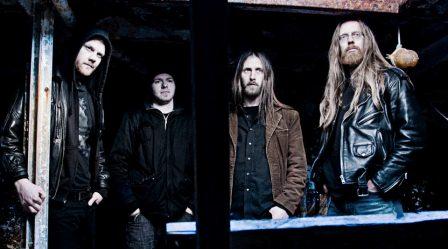 TIG: You work pretty fast if you’ve already got material for an EP, because the album came out in September [in Europe].

BT: Yeah, but the whole recording process and mastering and all that takes a long time, and in the meanwhile you’re going through and working on stuff. It’s not all complete, but a lot of ideas. Maybe the process was elongated for us. The engineer is a drum tech with Sigur Rós, and he was off doing a Sigur Rós gig. Sometimes you just have this need of doing something. And then maybe 90 percent of it won’t ever be used.

TIG: Are you going to do any touring for this album?

BT: We’re kind of hoping to, we’re talking to bookers in Europe.

TIG: And of course the U.S. is not on your list.

BT: Aaah, no really. We would say yes to anyone, but the U.S. is for some reason a difficult thing to do. I don’t know why. It is expensive.

TIG: You’re not playing any shows during Airwaves?

BT: We applied for Airwaves, but we didn’t get it. You know we’re quite young, the album wasn’t out. One of our members had a baby during the rehearsal process, so it was all delayed. We’ll definitely play Airwaves next year.

TIG: Maybe you’ll be playing the states then, too.

BT: Yeah, maybe. With Of Monsters and Men.

TIG: l saw them in Seattle two weeks before their full-length came out. They’re coming back in December.

BT: Yeah they’re touring all over. It’s been weird. They put something on Youtube, and then a few months later they’re just everywhere. It’s amazing.

TIG: There’s a case study in media savvy. It’s also really good music. I read an interview that said their lyrical themes are dark but they still wanted songs you could sing along.

BT: I remember when I first heard them, I couldn’t believe how young they were, [they sounded] just too mature. They also are also really catchy like Mumson, or what’s it called?

TIG: Mumford & Sons. Since you’re not playing at Airwaves, are you going to be watching shows?

BT: I want to see Sigur Rós. I hope it’s not sold out because I haven’t bought tickets yet. Is it sold out? I’m so disorganized. If I had a pass to Airwaves, I’d definitely see Swans. I can’t believe I’m not seeing Swans. I do that a lot. I just miss bands that I love.

TIG: Everybody here has brought up Mumford and Sons as a band they don’t identify with, and everyone wants to see Swans.

BT: I think that as a musician you never want to be thought of as being influenced by contemporary peers, because if you are, you are kind of losing your own identity. But I think regular people listen to Mumford’s Sons. What’s it called?

BT: Yeah, I think you always have these bands that are respected across the board by musicians. Swans is one of those cult bands. I like their diversity, and they’re odd and maybe musicians like that more. Killing Joke is one band that I’ve been listening a lot to. Absolute Dissidence, it’s just marvelous. Such a weird album! They just do anything. There are no limits. You never know what you’re gonna get, but it’s always good.

It’s kind of like Sigur Rós. Addi from Sólstafir was on Rás 2, the biggest radio station, and he said, “Only morons don’t like Sigur Rós,” and I agree with him.

I remember when I saw Sigur Rós first. We worked with them on an album before they were big. He was our recording engineer. I heard the first Sigur Rós – have you heard that one, their first? It was so weird. It was like no other band. I said, “Let’s call these guys and see if they can help us. We have to have them,” and then I called him up, and I was like, “Can you record with us in September?” He didn’t even know what month of the year it was, so I had to tell him. Then he helped us record an album in 1999. And then I saw them play live out in the country. No one knew who they were, and there were like 10 people there listening, and everyone was disappointed at not getting the Monsters and Men sing-along. And they’re amazing on stage! The sound they make is just like nothing else. Definitely, when I get home I’m gonna check up on the tickets. I haven’t seen them in a long time.

{Earth Blood Magic will be released in the U.S. on January 8th, but can be ordered as an import from Amazon now.}