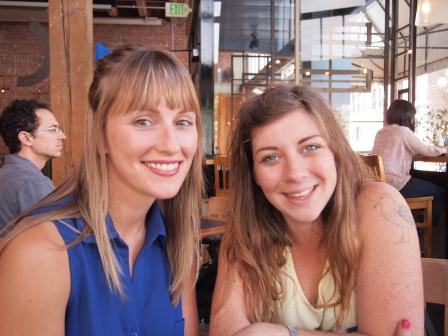 Lemolo, the duo comprised of Poulsbo natives Meagan Grandall and Kendra Cox, has been taking the world by storm lately, and can we just say, “We told you so?” Lemolo blew us away at the first show they ever played as a duo, and we have been singing their praises ever since. Their CD release party at Columbia City Theater on June 29 sold out so fast, they added another on June 30 – and that one sold out, too. Their self-released debut album, The Kaleidoscope, dropped on July 3 and since then life has been a whirlwind of touring and festival performances. It’s only a matter of time before Lemolo’s silken melodies wrap themselves around the collective shoulders of the music world and start haunting dreams nationwide. We were lucky enough to snag an interview with Meagan and Kendra in between gigs at Rock Camp for Girls and Doe Bay Fest. As we chat over coffee, they finish each other’s sentences, interject commentary, and generally weave their thoughts together in a way that's almost musical.

Imaginary Gemma: You came straight here from playing Rock Camp for Girls. That sounds like something awesome – can you tell me about it?

Kendra Cox: It is awesome. There’s two camps every summer, each a week long from like 9-5 every day. The girls form a band, choose a name, design a logo and play music. At the end, they get to play at a real venue. I think last week’s camp performed at the Crocodile. It’s so impressive because they’re learning life lessons at the same time.

Meagan Grandall: We played a lunchtime show. We played for half an hour and then did a Q&A, and the girls asked really good questions.

MG: Right, “How do you resolve your differences?”

IG: That is a good question. How do you resolve your differences?

MG: I explained we were good friends before we had a band, so sometimes it’s hard to talk about problems. We just try to have good communication –

MG: Where we have a big heart to heart about every six months, and we find the more often we do that the more in sync we are with our music.

KC: It is really hard and stressful to be in a band with your best friend, because we’ve got all our eggs in one basket. I cut my hours at work, and Meagan is full time with the band, and that’s stressful.

MG: We’ve been playing together almost four years. In the beginning, it was more like a hobby. Recently, we’re in a transition from hobby to career, and learning how to make a business together is challenging. I feel lucky to have a friend to do it with.

KC: Me too, Meagan is such a good friend.

{At this point the quality of the salted caramels at Zeitgeist was discovered and we found it necessary to pause for a salted caramel interlude.}

IG: From your Twitter feed it sounds like you are restocking your album at record stores pretty often. Are sales what you expected?

MG: It’s going pretty well. We didn’t know what to expect when we put out the album. It’s been a surprise.

KC: It’s been really, really awesome for me because I live here (Meagan lives in Poulsbo), so I get to check the record stores. It’s interesting to see we have a demographic – Ballard and Queen Anne are selling out every other week, but Capitol Hill’s not selling.

MG: We’re also selling online, and getting lots of international sales. We’ll see one CD go to Finland, and then a couple days later three or four orders from Finland come in. We’re getting these little pockets of fans all over the world. Probably the exposure on KEXP relates to that.

IG: The Kaleidoscope is a completely independent release. You even did your own graphic design. Are you motivated by a DIY ethic, or circumstances?

MG: A lot of it is circumstances. We have big dreams of having a big team to work with and lots of support. You have to start somewhere. We saved every penny from our shows; sometimes it was like $10, but I’m really proud we funded that. We reached a point where we were ready, the album was ready, and we didn’t want to wait.

KC: There were a lot of things we could have done – found a designer or found people to do things for us, but sometimes it’s just easier. It cuts out the middle person if you’re doing it yourself.

MG: We’re both controlling in the sense that we know what we want. We’ve found so far it’s easier, since we don’t mind putting in the work. The album worked out –

MG: It’s not to say we didn’t have

MG: Lots of people in the music community have helped guide us.

MG: I think that’s a huge part of the success of the album. For example, we did our own promo. We didn’t think we needed much time – we had a show planned and then we got a career-changing phone call from a friend who said, “Wait. Take a couple months to get set and promote. Give yourselves time to market.” It’s the perfect example of someone stepping in and looking out for us. I’m really grateful –

KC: For that person to step in and say, “Whoa, stop. You’re doing it wrong.” We’ve got a lot to learn. That’s part of what we like doing it ourselves.

IG: Sometimes I find myself singing your lyrics days later, and other times I get caught in the flow of the music and the lyrics seem almost textural. How do music and lyrics fit together for you?

MG: I wrote most of the songs on the album. Two of them Kendra and I co-wrote. I write all the lyrics. For me, the songwriting process is never one or the other comes first. There’s always a cool moment when I’m at the instrument (piano or guitar) and the lyrics and melody just come together. I don’t even know what the song’s about yet. It’s usually something I’ve been thinking about lately, but I don’t know that till later. Sometimes I’ll play with one part for hours, and eventually the whole thing comes together and I say, “Oh, that’s what it’s about.” I almost felt kind of powerless when the songs were written. I’m just open to what comes out.

KC: I think as far as how song pieces come together, that also just evolves. We value the spaces. Sometimes it all just stops and there’s just Meagan’s voice. Meagan’s vocals are sometimes like a third instrument.

KC: Sometimes during practice I’ll go upstairs for a glass of water and Meagan will play something while I’m gone. I’ll come back and hear it, and I can hear where I want it to go.

MG: For me, I love to tell a story. Whether or not it makes sense to others, it’s always meaningful to me.

KC: Our songs all have a beginning, middle and end.

MG: I like some ambiguity, to give people something to think about and try to figure out. The coolest is for people to come up with their own meaning. I hate it when people ask what the songs are about.

IG: Do you want to talk about influences?

KC: We have fairly similar taste in music, which is helpful when you’re writing music. Some of my biggest influences are recent, especially in terms of drumming and drum technique. St. Vincent is huge, and Warpaint – she is the greatest. I’m interested in things that sound unique. I like listening to lyrics, but I’m more into the sounds. I hear a sound and think, “What effects are they using?” I’m turning into a gearhead.

KC: The old standbys Feist and Cat Power. For you, Elliott Smith.

MG: I started writing music in middle school when I discovered Elliott Smith. Elliott Smith hugely influenced me. Also Emily Haines played a big role in my development as a songwriter, especially with her interesting lyrics and unexpected images. I like other bands with females; it’s empowering and inspiring to hear music made by women.

Last night we got to play with one of my biggest – Sharon Van Etten. She played one song that I love and I was literally crying in the front row. It was such a cool realization that we got to share the stage with her.

KC: In October we’re playing CityArts Fest. When I was first getting into music, my aunt and uncle fed me Riot Grrrls – Le Tigre, Sleater-Kinney. In October, Janet Weiss from Sleater-Kinney is opening for us and when I found out I literally lost it right in front of her and she patted me on the back.  It’s nice to remember that they’re a person, too. It’s nice to bring people down off the pedestal where you idolize them, and realize, “I could be that person for someone else.”

IG: Something that’s notable to me is the contrast between the smoothness of the album and the bouncy energy of your live show. Is that intentional?

MG: In the studio we have more control with the layers, and you can’t replicate that live. With an audience there’s energy and it’s natural to amp up and return that. We would love to find ways to bring the layers to live shows, too.

MG: We’re in a moment of transition. We released the album. We have narrow distribution, we’ll try to widen that online. We have cool shows up at Doe Bay this weekend, Music Fest Northwest in Portland, and CityArts Fest in October. We’re always writing new songs. We’ll keep doing our thing and see what happens.

KC: We have a couple new songs in the works. It’ll be nice in October to sit down and write. Even in a month if you ask us what –

MG: We have plans for videos too.

IG: Tell me about Duke.

{Both laugh before launching into the story of their first mascot, Duchess. Afterwards, by email, they explain that Duke actually came later.} 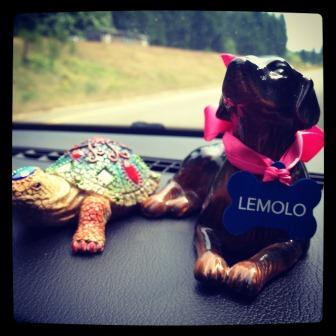 KC: This goes way back a long, long time ago. Meagan gave me a friendship bracelet for Christmas, and she wrapped it around –

MG: A porcelain dog from the dollar store.

KC: What the heck do you do with a dumb porcelain dog? So I put it in my car. I don’t know how we named it.

KC: Our first tour we got a personalized Lemolo dog tag and we took pictures of it everywhere. We don’t take –

MG: We don’t take anyone with us on tour, so mascots fill the void. Even before tours, we took a road trip and stopped at a grocery store and got a little pumpkin

MG: We named it and took pictures everywhere we went. Duke came later.

KC: I would love people to see how strange Meagan is. I want a camera in the car. She can really sleep in the car, and when she wakes up in a goofy after-sleep haze –

MG: We’re really comfortable with each other, so –

KC: It leads to hilarious conversations in the car.