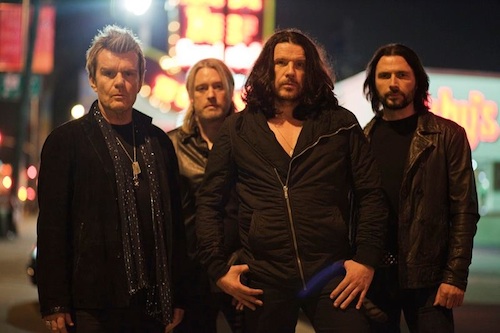 Recommended Nostalgia Show: The Cult at The Neptune {8/21}

My love affair with The Cult began with, appropriately, the single “Love”, from their 1985 release of the same name. From there, I snapped up all the imports I could find, including a copy of the Death Cult 1988 re-release, picture CDs with remixes, a tape of Electric scored from the Lynwood Fred Myer that I eventually wore out, and spent many hours dancing to "She Sells Sanctuary" at The Underground.

After 5 concerts spent swooning over Ian's voice and wishing that Billy Duffy was my boyfriend, and stomping around in my boots wearing jean shorts with ripped up black tights and Cult concert tees, my fascination admittedly waned after 1991’s Ceremony failed to wow me like their previous albums, and I am barely familiar with the songs on The Cult and Born Into This.

But the release of their new album, Choice of Weapon, has prompted a fresh tour, and because I know someone (Hi, Jenny George!) who is as excited as I am about The Cult, I HAVE TO GO to the show at The Neptune next Tuesday night (8/21). And you should too.

A few listens to the new album reveal the same hard-rocking Cult that I fell for long ago, and I’m more than looking forward to shoving my way up to the front of the Neptune’s stage to sing-along to my faves, and embracing the new songs with an appreciation for their (hopefully still) wildly entertaining live shows…for almost exaclty $21 more than I paid to see them in 1990 (although, with Ticketmaster fees that aren't shown on my ticket stub, I'm betting the gap probably wasn't that big).