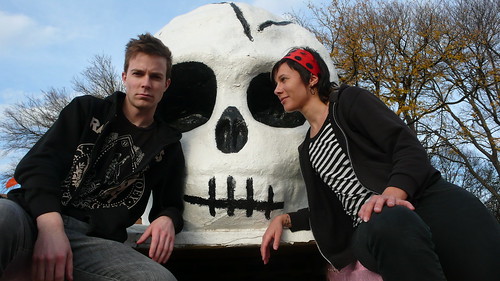 Matt and Kim are an adorable dance-rock duo from Brooklyn who weave together banging drum beats and amped up keyboards with chant a long lyrics. I caught up with them at Bumbershoot 2009 shortly before their set to discuss their life on the road, Beyonce, their last album, Grand, and future plans to record.

You guys have been touring for a while now, right?

Kim: It’s sort of like a non-stop life thing. I feel like we’re on the road more than we’re home.

Matt: We’re definitely on the road more than we’re home. But in such a sense that you get home and you’re like, ‘What am I gonna do now?’ It’s confusing. This is sort of a negative way to put it, but I feel like it’s similar to people who have been in jail for 50 years and they get out and they don’t know how to handle the real world because they are used to the schedule. Tour is kind of like that. There’s a sort of uniformity that isn’t like real life.

What’s one of your craziest moments from touring so far?

Kim: We saw Blink 182 last night. That was pretty awesome. They broke up and I thought, ‘I’m never going to get to see them play.’ I hadn’t seen them before.

Matt: They probably ran out of money and so they thought they should tour. It’s crazy, the amount of production and the amount of people— Or like, we went to see Beyonce at Madison Square Garden.

Kim: That was awesome! OK, that was the greatest thing that has happened to us this year.

Kim: I saw that she was there! I’ll admit, I was sort of like, ‘Damn you, Grizzly Bear!” I want Beyonce to come to my shows! I got to say, her show is absolutely amazing.

Matt: Yeah, we decided that we’ve got to step up our game after that.

Really? Are you going to start choreographing dances?

Matt: Yeah, we’ll get some trapezes and stuff.

Kim: I told Matt that if Beyonce ever came to me and said, ‘Kim, I need you to be my back up dancer,” I would be like, peace out, Matt, I gotta go.

Kim: Well, I will say, at Pitchfork this year, I tried to drop it like Beyonce, but I couldn’t get as low as she does. And I told all of Chicago that when we come back on this tour, it’s gonna happen. So I’ve been practicing.

I too have been thinking about ways I can be more like Beyonce. It’s a long and daunting road. Anyway… What’s one of the largest places you guys have played so far?

Matt: When we started out I could’ve sworn Sirens Fest was huge. But that was like the first time we played in front of a lot of people.

Matt: As far as the biggest show that was OUR show, we did one on Pier 54 on the West side of Manhattan. We were kind of blown away, the pier was really long.

Kim: After sound check we were walking back and we saw this long line and were wondering what the line was for and then we realized that it was for us.

You guys are clearly blowing up. Do you feel like you are maintaining your DIY attitude despite signing to a bigger label?

Matt: We’re doing what we always did–traveling around and playing shows. It’s nice to have comfort, like all the shows on this tour have sold out so far. Playing a poorly attended show brings your spirit down when you’re a band and your touring around and you’re tired. It’s like having a party and it’s early in the evening and no one’s showing up and you’re wondering, ‘do my friends not like me anymore?” You know, you kind of take it personally.

And you produced Grand, right?

Matt: Yeah we recorded it ourselves. Just kind of figured it out as went along.

A lot of people have commented on how it has a more precise, cleaner sound than your first album.

Matt: Yeah, it’s funny when I read people saying that we obviously used our higher recording budget to produce this album and I’m like, I recorded this in my bedroom, man.

In your childhood bedroom, right?

Matt: Yeah, with no heat, in the middle of the winter. But it was great. It’s the result of having time. As opposed to the first thing we recorded, we had no time. Being able to work on it for a while, you’re just able to finish things off and polish them.

Kim: We also knew how to play our instruments a bit better.

Matt: Our first album we recorded within the first year we started playing our instruments. Most people start playing when they’re like 14, not in their 20’s.

Did you guys have the songs written pretty much before you started recording Grand?

Matt: We had some ideas. It was just funny, we had traveled so much and were doing the band as a full time job but still had the least amount of time to write music. Basically, we set the time aside for writing and recording.

Kim: But it wasn’t enough time. We thought it would take two months but then we had to go touring again. It was useful. We got a break and when we came back to what we thought was good we were like, ‘what were we thinking?’ It ended up taking us nine months.

And all the recording took place in Vermont?

Matt: No, we ended up going back to our apartment in New York.

Kim: Annoying the shit out of our neighbors.

Matt: Plastered right up against our neighbors in our little eight-foot wide apartment, screaming at the top of my lungs.

Do you have big plans for the future?

Kim: We tour till December and then get Christmas off. Then we’ll take a break to write and record.

Matt: Yeah, it’s weird to start again. Grand came out in January and it has been hitting its peak just recently. We didn’t expect to get that kind of attention and it’s strange to start writing again when a lot of people are just finding out about it now. But we don’t want to burn out. We do this because we enjoy it. The second we stop enjoying it, then it’s over.