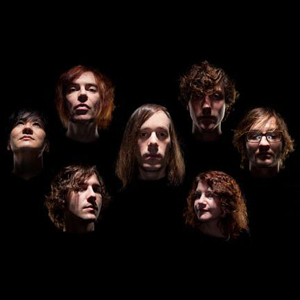 It’s no exaggeration to say Of Montreal main man Kevin Barnes has been around the block a few times. His act’s latest, Paralytic Stalks, which is out now from Polyvinyl Records, is their eleventh full-length release. The album builds on Barnes’ trademark indie pop formula, which traces its roots back to the Elephant Six collective’s heyday in the late ’90s. Although many of the familiar elements resurface, from Barnes’ witty, sometimes nutty vocals, to the vaguely Beatlesque sense of melody, Paralytic also features orchestrated instrumental stretches and an intricate songwriting hitherto unknown in Of Montreal albums.

It also pulls Barnes away from his recent habit of crafting a persona to serve as his album’s central figures. Paralytic is chock full of first-person narratives, a lyrical tactic Barnes hasn’t employed since 2007’s Hissing Fauna, Are You The Destroyer? It should come as no surprise, either, that it also dabbles in the darker, more psychologically tortured themes that last appeared on Hissing Fauna. Oddly enough, Barnes still seems to be the happy-go-lucky character at the center of his last albums.

TIG: You’re one of the few bands left around from the indie-rock underground of the ’90s. Does that give you a different perspective on making music or navigating the industry?

Kevin Barnes: Yeah, definitely because we’ve seen many changes in the industry from when we first started. Not just the industry, but the scene itself and the way people listen to music and the way people get their music out there. It’s so different. Also, the amount of people that pay attention to underground music has definitely increased. When we first started putting out records in the late ’90s, there weren’t really that many bands that you’d call indie-pop bands or whatever. There weren’t that many. It seems like now there’s a lot more bands.

TIG: Have you noticed any sort of ideological shift as indie music became more popular? It used to be almost a political statement to self-release records, and now it’s just kind of business as usual.

KB: Now it’s so much easier to reach an audience without being on a label, without having a big promotional budget. I think it’s great because it definitely levels the playing field. Hopefully to the point where if you’re really good, you can find an audience and you don’t need the support of major labels or any label.

TIG: Does that open the door to people who may be opportunists, just taking a stab at becoming famous through indie pop, where before it was more of a labor of love?

KB: I think it’s a good thing. There might have been people in the ’90s who were discouraged and just stopped making music because they weren’t able to reach an audience. That became a negative. I guess I don’t think it’s negative for people. The only thing is if people get too much too fast, they don’t have an appreciation for what it is and how hard it is to maintain it. If you just get it right away, you think, “Oh, this is cool and this is the way it’s going to be forever.”

TIG: It seems like you’ve put in enough hours to understand that you can weather ups and downs.

KB: For me, to struggle for so many years, it just made me appreciate the sort of peer aspect of it. I was making music because I loved making music and I felt compelled to make music. It didn’t really have anything to do with selling records or getting a wider audience or any of that. I think I just developed positive habits early on because there wasn’t any commercial pressure to make something that would sell. I made stuff that I wanted to make, and it didn’t sell, but it didn’t matter because it’s coming from a pure place.

TIG: Do you think bands still come from that pure place now that there’s more chance of finding fortune and fame with this kind of music?

KB: I don’t know how many people start bands just to be successful. I think people start bands because they love music and they want to create something of their own that feels more personal and singular to their own lives. I definitely don’t have a cynical view in that way at all. There definitely are major-label acts that are put together just for that sole purpose to sell records, but they’re not really artists so much. They’re products like Kleenex or Fruity Pebbles or whatever.

TIG: Paralytic Stalks is the most intricate and layered album you’ve done in quite a while. Was that more difficult to make it come together in the studio than previous albums?

KB: It wasn’t necessarily hard. It took a lot of time to get it there. I was thinking about this the other day, how I didn’t know how to make Paralytic Stalks when I started making it. Kind of what that means is that I didn’t have a strong vision, a specific vision of how I wanted all the parts to play out. I had an abstract concept of what I wanted to create. I tinkered with it for seven months or whatever to get it to a place where I thought it was finished. I had to put a lot of time into it. It was a great labor of love. I got a lot out of creating it, especially the longer, slightly more symphonic sections that were different from the things I’ve done in the past.

TIG: Did you have a more concise idea when you started older albums, or is that semi-blind approach the way you work?

KB: It’s kind of the way I work in general. I’ll come up with the spirit of the album. It’s a very organic thing and it takes on a life-force of its own. I get connected into that spirit and lose track of time, and just work and work and work for months and let the spirit create – I mean, it sounds really hippie – but it’s something where I have the sense of a personality or an identity for the record. I just tap into that and let it take its course.

KB: I just felt naturally compelled to write from the first person, just because I was going through some difficult times and to navigate through it all and keep my head together to redirect all this negative energy into something more positive. I tend to write more personal songs when I’m going through difficult times. If I’m in a happier state of mind, I might create a persona because I’m feeling a little friskier or more lighthearted. Whenever I’m going through a darker period, it seems like I rely on music as a form of therapy.

TIG: You’ve spoken about how you used Hissing Fauna, Are You The Destroyer? to help work through problems from your personal life. Is songwriting just your way to cope with problems?

KB: Yeah, definitely. It’s a good way to direct that energy, to direct it into something positive. Like, “Here’s a song, it’s sort of hateful.” At least you’re not going out and getting into a fight or killing an animal or something. [Laughs] It’s a better way to channel that energy.

TIG: Did your life take a downward turn since your last record?

KB: I have some depression issues. I’ve always sort of struggled with it. I don’t see a psychiatrist or anything. It’s just something that I’ve dealt with for a really long time. It just kind of comes and goes. Sometimes it hits me really hard. Rather than just laying in bed with the blankets over my head for days at a time, I try to feel  that agony and just to allow it to exist and use it for inspiration for something good.

TIG: Does that help exorcise those feelings when you put it in a song?

KB: Yeah, I think so. Sometimes just screaming it out, like primal scream therapy is definitely something that I do from time to time, not to sound like too much of a freak. I don’t think it’s bad at all if people have emotional issues. I think it’s good if it can inspire art. That’s one thing that’s probably more universal than we know. Everyone kind of goes through those things. When I think of records like John Lennon/Plastic Ono Band records, obviously it’s coming from a place of great pain and anguish and confusion. That record speaks to people like me who might go through phases like that. I’m happy that there’s a record that doesn’t make me feel as crazy.

TIG: A lot of people have been introduced to you since Hissing Fauna, which is the last time you wrote a record as dark as Paralytic Stalks. Do you think they might be surprised to find out there’s a darker side to Of Montreal?

KB: I guess it’d be different for each person. I’m happy that the records are different. There are a lot of groups that have their formula and they’re really great at that one thing. From album to album, it’s like, “Oh well, I don’t really need that album because they’ve already done that thing a thousand times.” I’m more interested in trying to have a catalog more like David Bowie or Prince, people who have gone through different phases and tried different things. Each record is special, but you can still see the connections from record to record. Bowie is a great inspiration in that way. He’s made so many different kinds of records in his glory period from the ’70s to the ’80s. It’s insane how many styles he experimented with, and very successfully, not just these failed, awkward attempts to be something different. It was always a really powerful and strong statement each time.

TIG: As an artist, if you reach the point where you can make your craft without much struggle according to a blueprint, don’t you owe it to yourself to try something different?

KB: I think so. Definitely me, personally, I’ll catch myself doing certain things and I’ll be, “Why am I doing that thing again? I’ve done it like that so many times.” It’s not exciting and it’s not fulfilling because I can do it well enough. It’s definitely more exciting to take chances and to flounder and fail a bit. That’s the direction you need to be moving, on some level as far as if you’re trying to create something different and get out of your comfort zone.

TIG: The rewarding part of a creative endeavor is trying to figure out how to do something new, isn’t it?

KB: I don’t think it’d be very rewarding to make something that’s pretty much identical than the thing you just made. Some people are different. Some people are more autistic about it, and get the same pleasure by doing the same thing over and over again. Sometimes I feel like they’re the lucky ones in a way. You think of Keith Richards and he’s played “Satisfaction” millions of times. I read an interview and he said every time he plays it he gets a charge out of it. I think it’s true, just thinking about him and the way that he is. He seems to be totally loving it, like really enjoying it when he’s rocking out and playing “Jumpin’ Jack Flash” for the millionth time. There’s something about them, they’re just the Stones. It’s almost like they are a caricature of the Stones, but they don’t seem to care. Because they embrace it, we all just embrace it. You wouldn’t want it any other way at this point.