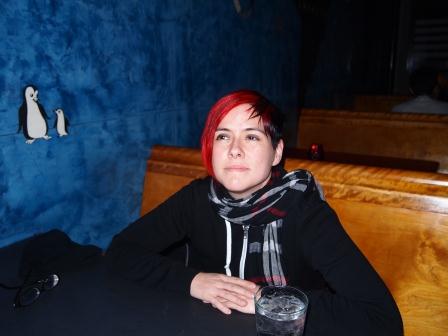 The Redwood Plan celebrated the release of their second album, Green Light Go, at Neumos on February 15. Adding electronic elements to their dance-punk sound, Green Light Go is more textured, more dynamic, and if it’s even possible, more energetic and fun than their debut Racing Toward the Heartbreak. We were lucky enough to chat with their powerhouse front-woman Lesli Wood before the band took off on a Midwestern tour to support the new album.

TIG: How was the CD release show at Neumos?

Lesli: It was a little overly ambitious to try to have our CD release show there, but we worked really hard, and of course having Head Like a Kite on the bill made a big difference because they’re a headlining band. Everything just came together really well, and everyone was super responsive. I spent the weekend completely elated.

TIG: Do you DIY everything?

Lesli: I brought on Riot Act Media for publicity on this album. It gave me a chance to focus more on tour booking. Otherwise, everything is completely “do it myself.”

TIG: Beside the electronic element, was there anything else you approached differently on the new album?

Lesli: With the first album we didn’t really know what our sound was going to be. Over the years, everyone created their own distinct voice in the band. Syd, the guitarist, has a very distinct guitar style, and Betty is a machine on the drums, and Larry is this amazing Mike Watt-style bassist. Incorporating all the electronics, I was writing a lot of parts on my own and hadn’t really left a lot of room for individual voices. That was something for me to learn, not just psychologically giving everyone space, but actually making room within the song for another bass line. The songs ended up really showcasing everyone’s individual sounds to create what is now the Redwood Plan.

TIG: It sounds like your writing style is somewhere between having one songwriter and jamming it out as a group.

Lesli: Absolutely. When the band first started, someone would come in with a riff and we would write the song from there. This time, I wrote every song and brought it in to the band. Some of the songs are verbatim how I brought them in, and some of the songs are very, very different. “Your Fair Share” and “Green Light Go” are based on a riff and a pattern that Betty had come up with. I’ll basically take the idea and make a song out of it. That could change as we’re writing the next album, but that‘s how it evolved writing this one.

TIG: Does Redwood Plan relate to “dance punk” as a genre, or did that sound evolve independently?

Lesli: I wanted to start a dance band after I was in a riot grrl band for about 10 years called Ms. Led that disbanded in about 2009. I wanted a band that would just be fun and not have a lot of pressure. Betty was the first person that I had in mind to play drums. She and I went to see Faint and Natalie Portman’s Shaved Head and the show was so over-the-top. I mean it was just sweaty and insane and I was like, “I wanna do that.” I wouldn’t say that we sound like either of those bands but whatever was happening in that room was what we wanted to bring to our audiences.

TIG: From that one show, where did it go from there?

Lesli: We initially had Jamie Hellgate on bass and then Syd, who I met through mutual friends. We started cranking out some songs together, like verse chorus verse chorus done. I had this sort of 'fuck it' mentality. And then people responded very well to the album. So we started touring. Jamie left; she was fronting H is for Hellgate at that point. We got Larry Brady in on bass, who is an old friend of mine. We had all these amazing opportunities: the main stage at the Block Party, and Bumbershoot, and these incredible tours. Then at the end of that run we were left with the question, “What do we want to do now?”

I didn’t want to do that album again. We had created something, but we didn’t quite know how to articulate yet what that was. We had a new, progressed, matured chemistry and so we had to acknowledge that. The opening track on the album, “Panic On,” is about that phenomenon. It really was me who had been holding back.

I was finally like, “No, this isn’t just for fucking fun. I really want us to be able to enjoy being in this band for as long as we can and as long as everyone’s into it.” We really didn’t know if anyone was going to care about the second album. So the fact that we got such an amazing reaction – we are feeling pretty good.

TIG: Do you all still bring your difference backgrounds or has that also evolved?

Lesli: That’s also evolved. I mean, it’s impossible to negate history. Someone asked recently if my songs are still feminist, and of course they are because I’m still a feminist. I think it’s impossible for me to keep my opinions out of my lyrical content, but I’m very about trying to live now. What’s so great and exciting about music is that there are constantly new ideas. I like the band to bring their own evolutions into the sound.

TIG: The first time I saw the Redwood Plan was the Reykjavík Calling show. The collaboration you did was so interesting.

Lesli: We were invited by KEXP, which was awesome for us. And it was really intimidating at first. They said we’d be doing a collaboration with this author, Sjón, who had worked with Björk in Dancer in the Dark and with Sugarcubes. I had always written all the lyrics and it was interesting to bring someone in who obviously had their own style. I was like, “We’ll figure it out.” So I sent him two songs and I said, “I’m going to write a song that’s kind of in these realms.” I took a couple days off work and I wrote a song on piano and brought it to the band. We started fleshing it out, and it ended up being this really elaborate song. He sent the lyrics about a week before the show. This gorgeous poem called “My Pocket Island” fit stanza by stanza, verse by verse right in the song. Even the dynamics and the emotion fit perfectly.

Usually we don’t stop at all to talk to the audience; it was a little nerve wracking for me to put the brakes on in the show and set it up for everyone. And the response was so amazing that we actually put off the album. The album was already pressed and now I have many, many, many boxes of the album that will never come out because it was the album without “My Pocket Island.” We put off the album specifically so we could add that song. 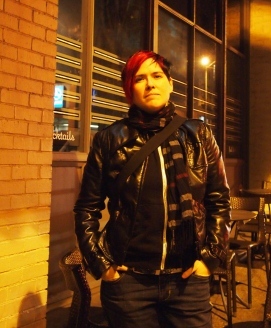 TIG: I was impressed by the story you told about moving out here to become a rock star.

Lesli: In like 1995 I came to Seattle on a whim to visit a friend, and I thought it was the most amazing, gorgeous place. I went home – I was living in Michigan at the time – and I was like, “I’m moving to Seattle.” The first time I came out here, I heard KCMU (which is now KEXP) and I remember my friend saying to me, “You know they play local bands. Maybe when you get out here you can get played on KCMU.”

When I finished college in ‘97 I got on a plane with a suitcase and a guitar and just showed up. I lived in hostels for a little bit. I busked down at the Market, 4th & Union, all the regular places. I was so green but I was so excited to be here. I’m still excited to be here. I still remember when someone explained to me how to book a show at the old Croc and it was like, my most exciting day. I really thought I’d made it when I booked my band at the Croc.

I’ve now lived in Seattle longer than I’ve lived anywhere else. My life is here. When we first started the band one of the reasons it was supposed to be so quick was that I was moving to New York. I had a job and a girlfriend; I took the bar exam out there and I was ready to go. Honestly the band was a big, big reason why I stayed. I loved being in the band so much. Everyone told me: Why would you go somewhere else and take fifteen more years to get what you’re already doing right here? The Redwood Plan was really this sociological experiment to see what I had made of myself in all that time, if I could really do something with that. And obviously I’m still here. I’m living the life I hoped I would have when I moved here.

TIG: You have a new video out and it’s so much fun.

Lesli: It was so much fun to make! We shot it fairly quick, but Gina Mainwal, the director, put so much work into it. She had done the video for my old band, and I just emailed her, “I think I’m going to do this video. I haven’t seen you in years, but are you interested?” I told her what the concept was and she just totally nailed it. It gives context to the Redwood Plan. Before, everyone was like, “What the fuck does that mean, Redwood Plan?” And now it’s like, “Well, watch the video.”  When it says “To be continued,” it really is going to be continued. Two more videos will continue that storyline.

TIG: At the Reykjavík Calling show I saw this little white cat on your laptop, and your label name’s Fish the Cat. Is there a fifth band member?

Lesli: So it’s actually two separate cats. My previous label-owning partner and I ended up naming the label Fish the Cat Records because Fishy was such a personality. Fishy passed away and my partner at the time found this little white cat with one blue eye and one gold eye and she called me up, “Will you just harbor a fugitive for one night until we can find someone to take care of him?” The most adorable little cat in the whole world came running up to me and I was like, “I’m gonna name him Pilot.” And Pilot is my baby. I’m never gonna have children, but I love that cat. The picture on my laptop is Pilot, there is an Instagram site for Pilot, my whole Facebook site is Pilot. Fish the Cat is my old cat, who I loved very much, and Pilot is the king of my heart.

Lesli: We’re super excited about that. We’d never thought about going to Australia and then some opportunities fell in our lap. We have a lot of shows booked, and we’re going to the Great Barrier Reef because I don’t know that any of us will get the chance to go again. One of the best parts about being in a band is that the weirdest shit happens to you. Nothing surprises us anymore. Now when something like that happens we’re like, “We’re going.” There’s no, “Aw but my job, blah blah.” Everyone’s in. It is the single best part of being in a band. 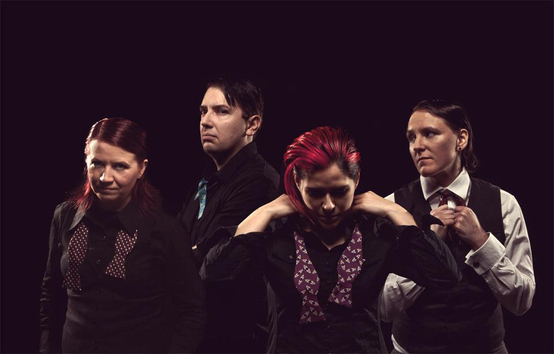 {You can buy Green Light Go online from Amazon or directly from the band's website. Redwood plan photo above by William Anthony.}