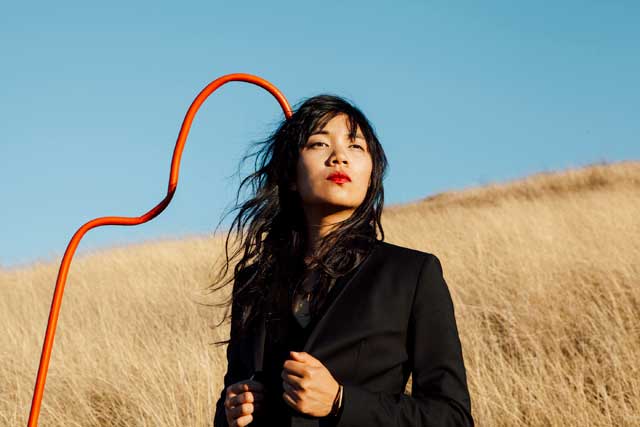 Imaginary Interview: Thao Nguyen of Thao and the Get Down Stay Down

Thao Nguyen is known for brutally frank emotional dissections in her lyrics. Combined with her casual, personal stage presence and a disarming hint of twang in her speech, the overall effect is one of unguarded and unselfconscious openness. But when you talk to Thao one-on-one, you quickly realize that every aspect of her music is the result of very deliberate choices made by a razor sharp mind.

The fourth album by Thao and the Get Down Stay Down, titled A Man Alive, came out on March 4. Like her earlier albums, the upbeat, playful music belies the heavy themes of her lyrics. Thao and the Get Down Stay Down albums swing between introspection and an outward gaze. Know Better, Learn Faster was all about personal relationships while We the Common considered the problems we face in community. A Man Alive returns to the personal, facing up to the hurt in Thao’s non-relationship with an absent father. In between Know Better… and We the Common, Thao participated in a number of collaborations with artists outside of the Get Down Stay Down that connect to changes in the musical approach to A Man Alive.

Reviving her collaboration with Merrill Garbus of tUnE-yArDs fame (he produces and performs on the album), Thao approached songwriting from a different angle for A Man Alive. It’s still immediately recognizable as a Thao album, but A Man Alive is an obvious break from the flavor of her earlier music, replacing the folk influence with more electronics, more funk, more groove – well, more of just about everything. You will hear toy piano, harpsichord, gamelan and glockenspiel in addition to lots and lots of bass. In less sure hands this eclecticism could become chaotic but A Man Alive is held together, it seems, by the sheer force of Thao’s personality.

“The end of our last touring cycle, we started as a band to gel live in a way that was very gratifying and sort of hinted at the new direction we were taking. Which means that it was more beat and bass driven, the parts of our live show that I loved the most. I wanted to better channel and capture that energy on the next record. It was a concerted effort to move away from songs where the spine was a guitar-based chordal progression. They’re written on whatever instrument, but then have that instrument stripped away and restructure it, and then reintroduce guitar or mandolin or whatever in a more riff-based way, almost as if it were being sampled.”

This new approach may be most apparent in the track “Meticulous Bird.” Thao says,

“It holds a deep importance on a lot of levels. It started when I was demoing on my own, just sort of a foray into drum programming and electronic beatmaking. Then Merrill challenged me to write a song without using an instrument and that’s when I started writing the first couple verses. I wanted to be writing to the beat that I had programmed. Contentwise it was this really incredible opportunity to show rage in a different way, to show anger. I wrote it for survivors of sexual violence and I make it a point to say that when performing it live because I want people to know the content and the context. I offer that as a way for people to explore the reclamation of the body.”

Despite the heavy subject matter, it’s one of the most danceable tracks on a beat-driven album. Thao says the contrast between lyrical content and musical energy is entirely intentional.

“The priority for me in making this record was always twofold. One, I knew it was going to dig into really personal material, and two, if I was going to do that I had to make it so that I would enjoy performing it every night. So that we could still channel a kind of exuberance and vitality and have that as part of a communion with the audience. It was a selfish move in a lot of ways because the material can be and has been incredibly intense and depressing. There’s no way that I would confront it in that way every night if it was a more somber sounding record.”

“We really enjoy performing. That’s my favorite part of this job, performing these songs live, and I want anyone who’s with us to have a good time. It doesn’t necessarily have to be lighthearted, but I want it to be energetic. After you write the song and then you record it and then you perform it, there’s different degrees of letting go of whatever personal ties you have to it. When we’re performing, I’m there for the communication part and the interaction with the crowd.”

You can be part of that interaction on Saturday, March 26 at the Neptune. Tickets are still available ($18.50+fees). Doors at 8 pm, show at 9 pm with Car Seat Headrest opening.

Top photo: Thao Nguyen of Thao and the Get Down Stay Down. Photo credit: Maria Kanevskaya