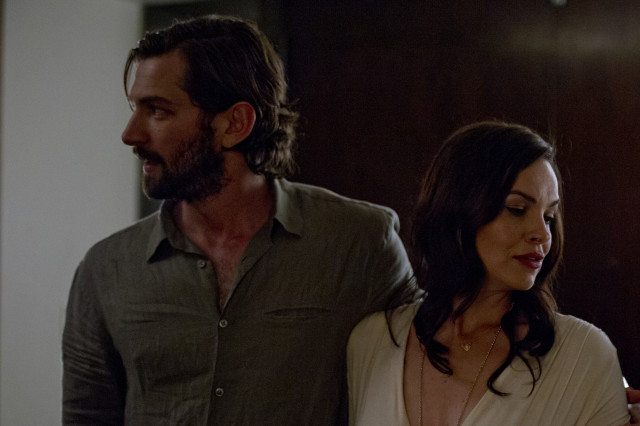 It takes mastery of pacing and atmosphere in order to build a good thriller, and Director Karyn Kusama definitely has a handle on both with The Invitation.

Will {Logan Marshall-Green looking so at home in his Fury Road-inspired hair and beard that I did more than a few double-takes thinking it was actually Tom Hardy} and his girlfriend Kira are invited to possibly the most awkward dinner party ever: a reunion of old friends at Will’s ex-house with his ex-wife Eden — whom he hasn’t seen in over two years — and her new husband, David.

From the moment Will steps into the house, things seem off, and as details about Will & Eden’s past traumas are revealed, they get more and more uncomfortable. Add in a slightly unhinged stranger who is part of a religious “experience” Eden & David had in Mexico plus an incredibly fucked-up game called “I want,” and you know something crazy is about to go down even before John Carroll Lynch walks through the door.

And oh hey, by the way, what’s with the bars on the windows and all the doors locking from the inside?

Without giving anything else away, let me just say it moves quickly from messed up to more messed up to … kind of a sad relief? And then, yeah. Hold on to something {or someone} for that last bit — including the mesmerizing final shot.