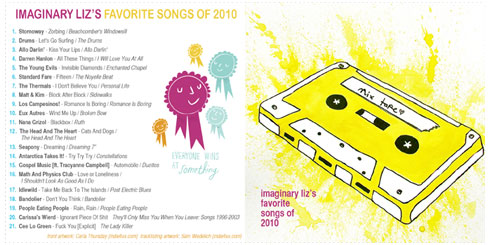 It usually isn’t in my nature to go against the John Roderick grain, but when it comes to end of year lists of favorites, I can’t help myself. I have to gather all of my favorite songs into an MP3 scrapbook for my own current and future mental sanity.

Perusing the song stacks of the past year allows me to recall and file the past year before opening up my next year’s calendar. Having an MP3 scrapbook gives me a one stop shop when, a year or even 15 days from now, I ask my-list-driven-self “What was 2010?”  {because aren’t all of our best memories tied to a song?}.

The answer to that question is below in the form of the playlist of my Imaginary Liz’s Favorites Songs of 2010 mix:

1.  Stornoway – Zorbing / Beachcomber’s Windowsill
This is a solid album that is a soothing blend of a bashful Mumford & Sons, randy Features with a pinch of John Denver.  This is the most rocking song on the album and the best Stornoway gateway drug, although I nearly featured “Long Distance Lullaby” on this record because I’m a sucker for love letters about late night phone calls. If I was the kind of girl that would have two songs by the same band on a single mixtape, “Long Distance Lullaby” would be a great way to end this year’s wrap up.

2.  Drums – Let’s Go Surfing / The Drums
I’m a sucker for their Spector-esque take on the new wave of the retro reverb. I also love that igDana suggested that the chorus is actually, “Obama, I want to go shopping!”

3.  Allo Darlin’ – Kiss Your Lips / Allo Darlin’
It is far from hyperbolic to say this is my album of the year if not the decade.  I can’t recommend it highly enough. It’s got the sweet coy of Heavenly, the foresight of Weezer (name checked in this song), and the jangle guitar of the Wedding Present. I’ve got several candles lit in hopes Allo Darlin returns to Seattle this year {they are set to play the San Francisco PopFest over Memorial Day weekend – which is just a hopskipjump away!}.  They are getting a lot of attention from critics and record store fans far and wide, so I can only hope that Allo Darlin’ is the future of sweetheart pop {and that sweetheart pop is the future of twee}.

4.  Darren Hanlon – All These Things / I Will Love You At All
It’s taken longer than expected for me to fully connect with Darren Hanlon and this is the album that solidified my belief that he is the one to carry the book-smart songwriter torch for the Australians. He follows in line with fellow library-card holders Colin Meloy and Elvis Costello in providing humble yet exhilarating sing alongs.

5.  The Young Evils – Invisible Diamonds / Enchanted Chapel
With a confident melding of lovingly carefree boy/girl vocals over a hearty Pixies-esque backdrop, each song is a comfortable campfire singalong.  I’m so proud to call The Young Evils a Seattle band through and through. The two leading members met while working at Easy Street Records, lead singer Troy Nelson is loved as a favorite KEXP DJ and their debut, self-released album is a solid batch of songs that make them a “Band to Watch.”

6.  Standard Fare – Fifteen / The Noyelle Beat
This three-piece from Sheffield have rocked my world with this Joan Jett meets Los Campesinos gutsy song.

7.  The Thermals – I Don’t Believe You / Personal Life
This Chris-Walla produced album is built on an expanded definition of the Thermals we’ve come to expect over the band’s previous four albums. It sounds fuller and, dare I say, adult while packing in the sense of urgency and riotous overtones we love.

8.  Matt & Kim – Block After Block / Sidewalks
Nothing beats a Matt and Kim show, but having a new album released now and again gets me through to the next time they visit town and offer up their signature cathartic love fest.  I wonder what would have happened if they had ever been signed to Grand Royale?

10.  Eux Autres – Wind Me Up / Broken Bow
This new self-released Eux Autres features the band {now a three or four piece, depending upon what’s up} assured and ready to take a PopFest by storm. I had a hard time choosing a song from this extremely consistant album, but this felt like the perfect sampler of all things Eux Autres.

11.  Nana Grizol – Blackbox / Ruth
The sophomore album by Nana Grizol picked up where 2008’s album of the year {Love It Love It} left off. Combining everything I love {Los Campesinos!, Bright Eyes, lofi pop} into an Athens, GA package, I am defenseless against this song, “…now it seems as though we speak a completely different language / but you’ll always be as beautiful as the moment that we met.”

13.  Seapony – Dreaming / Dreaming 7”
Seapony is a brand new indie-pop band that glistens with jangley guitar and arid soundscapes that mix the sweet coyness of Heavenly, the striped down beauty of Galaxie 500, and a timid version of the Ronettes. They have yet to release a full album, but in the short time they’ve been together they’ve played a handful of shows, released a 3-song EP CD, and sold out of their only 7″ record release.

14.  Antarctica Takes It! – Try Try Try / Constellations
A cute song that has gotten me through many a work out this year. Try Try Try!!!

15.  Gospel Music [ft. Tracyanne Campbell] – Automobile / Duettes
This my favorite lo-fi bedroom pop song of the year. The first time I heard it I felt like I had stumbled upon a Calvin Johnson demo that was tossed out for being too catchy.  It’s also my favorite thing Tracyanne Campbell (of Camera Obscura) has ever done.

16.  Math And Physics Club – Love or Loneliness / I Shouldn’t Look As Good As I Do
It was really hard to choose between this song and their cheeky nod to the twee-pop scene I love so much, “We’re So DIY.”  I’m still not sure if made the right choice, but the clever phrasing and Oh Oh Oh Ohs got me.

17.  Idlewild – Take Me Back To The Islands / Post Electric Blues
I’m a sucker for the Scottish brogue in every Idlewild song, but the comforting escapist sentiment of this particular track had me listening to it on repeat.

18.  Bandolier – Don’t You Think / Bandolier
I am so excited to see what’s next for this Seattle band who crafted a scrappy. lovable flirting song against an unintimidating soundscape of reverb.

19.  People Eating People – Rain, Rain / People Eating People
This album is a testament not to judge a band by its name. PEP songs are filled with strength and moxie and leave me refresh and inspired… very different than how I would feel when hearing the words “people eating people.”

20.  Carissa’s Wierd – Ignorant Piece Of Shit / They’ll Only Miss You When You Leave: Songs 1996-2003
This track is from a batch of re-released songs from Carissa’s Wierd, a band who I believe shaped Seattle music {if not created a whole new alt subgenre} for the better.  Pick up the re-released albums on vinyl and feel cool for decades to come.

21.  Cee Lo Green – Fuck You [Explicit] / The Lady Killer
I dare anyone in the world to deny the power of this song. Sure, it’s not suitable for the kiddies, but it helps the adults make it through many an annoying day.

If you like this mix and want to burn a copy of it for yourself, you can download a print-ready PDF of the cover art I designed for it. The artwork on both sides of the cover art is from Indiefixx’s Feed You Soul {free downloadable art} series, which is one of my favorite things from the last couple years. The artwork on the front of the mix is by Carla Thursday and the tracklisting-side artwork is by Sam Wedelich.