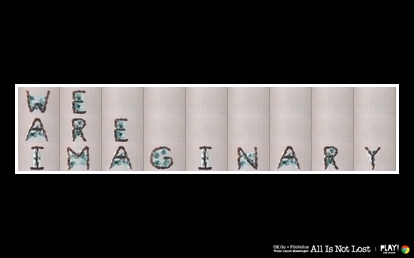 If you’re new, you might not know that OK Go is not only a rockin’ band, but they’ve been creating completely insane and creative videos that people fall all over themselves to watch because they are so totally awesome.

Their latest for “All Is Not Lost” was released this morning, and they’ve stepped it up by making it a “Google Chrome experiment” which means that a) you can enter a message that will be integrated into the video (if you can’t tell, those are FEET spelling out that message), and b) the video frame itself moves around and changes to accomodate the action. what. It also means that the next one is going to have to be filmed in space or something. Anyway, the way it works doesn’t really allow for embedding, so go here, enter your message, and watch. It’s pretty f’ing amazing, you guys.