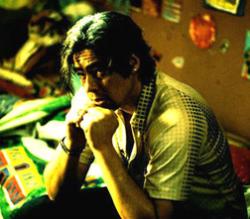 The moment when one's life violently slips from normal routine to tragedy — especially those tragedies caused accidentally — is sudden and without warning. That jarring and nonsensical event has always been a challenge to present on the screen. Alejandro González Iñárritu's second film masters this by structuring a triptych storyline in stubbornly nonlinear form.

Like the director's brilliant debut Amoros Perros, 21 Grams is centered on a car accident that greatly affects the principal characters. Naomi Watts is the recovered addict whose stabilized life is upset by the loss of her family in the tragedy; Benicio Del Toro is the accidental killer whose own shoulders are now burdened with a questioning of his faith; and Sean Penn plays a math professor who receives a heart transplant from Watts' late husband — with some heavy guilt attached.

While other nonlinear films are put together that way to better convey a character's POV (Memento) or the film's story arcs (Pulp Fiction), 21 Grams is told in the method that most deeply hits the audience emotionally. It is exhausting and pretty depressing to watch, but the film's originality and intelligence make for a profound cinematic experience.

Iñárritu creates a puzzle organized by the parallel stages of grief, loss, and love in the three main characters. Watts moves roughly and with utter heartbreak from domesticated wife to a vengeful addict hell-bent on destruction; her character couples with Penn's in a relationship based solely on revenge. Del Toro's odd physique helps him affect an intimidating figure, though his face shows his inner torments. All three actors have turned in some of the finest performances of the year.

Some films are told in innovative ways for the sake of Cool, or for the sake of tech-advancement showiness. 21 Grams is told to better focus on its main theme: the bewildering, emotional power of tragedy.