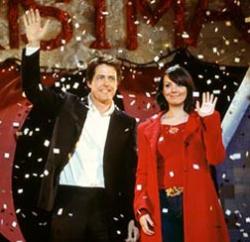 Baggage claim at Sea-Tac, mid-2002. I'm meeting my visiting parents, up from Arkansas for a long weekend. My mom spots me in a crowd and screams, runs over and hugs my neck and won't let go. Minutes pass. I glance to my right (looking for a means of escape?) and notice a slight woman, around Momma's age, watching us intently… as she wipes tears from her eyes.

Love Actually begins and ends with documentary footage of similar reunion scenes at Heathrow Airport's arrivals gate. (Because love is everywhere, you see.) Admittedly I got a little bit choked up as I watched — but was it because of familial warm-n-fuzzies, or the fact that it was Heathrow? I still haven't decided.

After writing some of the biggest British comedy smashes of the last decade (Four Weddings and a Funeral, Notting Hill, Bridget Jones's Diary) Richard Curtis makes his directorial debut with this new ensemble romantic holiday comedy set in London. (Excuse me, I'm getting choked up again.) Several interlinked relationships are explored: Hugh Grant is a new Prime Minister who begins to fancy a fetching staff member (Eastenders' Martine McCutcheon); Hugh's sister (glorious Emma Thompson) frets over the fidelity of her successful husband (Alan Rickman); one of Rickman's employees (wonderful Laura Linney) yearns for the love of a co-worker (hot Rodrigo Santoro) whilst dealing with some heavy family shit. Then there's a sad, recently-widowed pal of Emma's (Liam Neeson) dealing with single-parenthood. And Colin Firth, a novelist who decamps to France when he catches his wife and brother gettin' it on, then finds love — language barrier bedamned — with his Portuguese housemaid (sizzling Lucia Moniz). And Bill Nighy is a faded rock-hellion desperate to make a comeback number-one holiday single, with the help of his lonely manager (Gregor Fisher). And and and… well, you get the idea. Breathtaking Keira Knightley (as a new bride pursued by her hubby's cutie-pie best friend) and Billy Bob Thornton (as a skirt-chasin', country-assed US President) round out the star-studded cast.

Whew! This is a lotta plot to cram into a 129-minute movie, and Curtis almost manages to pull it off. The setup is neat, sharply-paced, and lotsa fun. Eventually the true nature of the characters' conflicts comes to light, and the film is eminently more fascinating. Then, toward the end, you start noticing a scramble for resolutions — some of the stories' denouements feel forced and unconvincing.

Keeping with true big-ol'-holiday-blockbuster style, there's an undeniable cheesiness to the film's proceedings (e.g., a longing-to-be-with-you scene set to the Dido song "Here With Me"… no kidding). But Emma's Joni Mitchell-themed story is genuinely heart-wrenching, and Hugh's stirring debate with cocky President Billy Bob (Britain will not be bullied by America!) really set my spirit free. (I'm getting misty just thinking about it.)

And when Rowan Atkinson (Mr. Bean himself) pops up in a brief role as an über-meticulous jewelry-counter clerk, the film becomes genuinely, bust-out hilarious. I was yellin' laughin' and literally in tears. It's a classic scene, easily worth an admission price, but little else matches that giddy thrill. This is a movie that would rather be glossy and accessible than original and challenging.

Nevertheless, Love Actually is full of warmth and festive cheer and good-natured nonsense, which may be just what your chilly heart needs right about now. Take your folks (after they pick you up from the airport, perhaps) for a couple of stress-free holiday hours. Like your own personal yuletide comedy, it will likely be playing in their hometown.