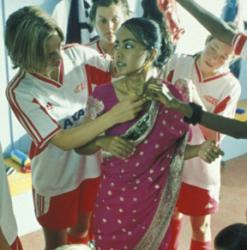 "Football" is the proper name for what most Americans call "soccer". Since I happen to be European at heart, I shall refer to football as football in my review of the wonderful British football-related hit Bend It Like Beckham.

And because we don't seem to give a fuck about what goes on in the rest of the world when it doesn't involve our economic interests or terrorism or oil or Michael Jackson, most Americans will have no idea what that title means. I will explain. David Beckham is a major football star in the UK (and FYI, a hottie, and also FYI, the husband of one of the Spice Girls). The observation "nobody bends it like Beckham," from which the title is drawn, sounds incredibly sexy but actually refers to his remarkable ability to kick the ball in a curving arc and past the opposing goalkeeper.

Now that you have this information, there's no reason on God's green (for the moment) Earth that you shouldn't get your ass to the Guild 45th and experience the most joyous, lively, and just plain fun movie I've seen so far this year.

Now as much of an Anglophile as I've become these past couple months, my Union Jack loyalty doesn't hold a candle to that of igLiz, who joined me at the Saturday morning screening. "Do you think we'll see uncut British ding dong?" she enthusiastically inquired, obviously having spent way too much time hanging with me and/or perusing anything I've ever written for tig. "Naw, it's PG-thirteeny," I replied, but wished otherwise a few minutes later when Jonathan Rhys-Meyers made his first on-screen appearance as coach Joe.

{editor's note: embracey! I sooo did not say "uncut" and "British"! -igLiz}

But I'm getting ahead of myself. Joe isn't the subject of Bend It Like Beckham. Beckham isn't even the subject of Bend It Like Beckham. The movie's about Jesminder (aka "Jess," played by lovely Parminder Nagra), a feisty Indian-Anglo London lass whose traditional Sikh parents (Anupam Kher and Shaneen Khan) don't want her to show her bare legs in public, much less run around all unladylike playin' contact sports with a bunch of dykey English gals. But Mum and Dad are too busy planning the (arranged) marriage of Jess' older sister to notice what Jess is really up to during her summer afternoons.

Jess makes friends with Jules (fetching Keira Knightley), a sporty-spice white chick who encourages her to try out for the local team. Joe is the beautiful, blue-eyed, slightly-androgynous coach, and soon both girls have a crush on him. So did igLiz, whose panting in the seat beside me far surpassed her hot-and-bothered Wing Ding behavior late last year.

{editor's note: OK embracey. Yes, I admit it. There were times when the sight of him made me lose all control. But before you even suggest that I periodically felt you up while looking at Joe on screen, shall we discuss your little infatuation with Jules? -igLiz}

Aye, 'tis true – she had me feeling a little bit bicoastal. But she was so boyish! During one scene Liz even exclaimed, "Word up. I'd do her!"

{editor's note: embracey! I never said "Word up"! But anyway, no wonder the girls' parents got weird ideas about them. How funny was it when Jules' clueless mom overheard them arguing about Joe and assumed they were having a lovers' quarrel? -igLiz}

Very very. That bird is tick, innit? At one point she even has the nerve to attempt cultural sensitivity by bragging to Jess, "You know, I cooked a lovely curry the other day!"

Not that Jess is interested. Early in the film her mom moans, "I was married at your age – you don't even want to learn to make dal!" Parents just don't understand.

There's much much more. A vibrant wedding, hilarious dialogue and sight gags, exhilarating football scenes, a rousing soundtrack (featuring the likes of B21 and Texas and Gunjan), and a happy ending that you don't quite expect. Look, I don't claim that it breaks new ground – there are certainly echoes of Monsoon Wedding and Personal Best and My Big Fat Greek Whatever. But director Gurinder Chadha has made a wonderfully entertaining crowd-pleaser that actually treats multiculturalism and feminism with the uncondescending respect they deserve.

When's the last time a mainstream American film achieved that?